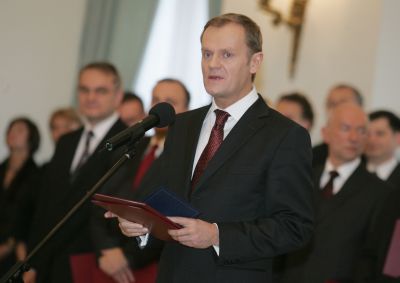 The new Polish government led by Donald Tusk won a vote of confidence in Sejm, the Polish parliament, on Nov. 24. The leader of Civic Platform (PO), which won parliamentary elections a month ago, received 238 votes while 204 deputies voted against.

Tusk’s government was backed by PO and the coalition Peasants Party (PSL) led by Deputy Prime Minister Waldemar Pawlak, while Law and Justice (PiS) and Left and Democrats (LiD) voted against. The voting in Sejm was preceded a day earlier by Tusk’s 185-minute inaugural speech, by far the longest in the history of post-Communist Poland. Then MPs issued more than 500 questions to the new prime minister, which caused the voting itself to be rescheduled for the next day.

On Saturday the 24th, Tusk took another 100 minutes to continue answering questions. Then the confidence vote followed. In Tusk’s inaugural speech, the leader of PO put stress on economic development of Poland which was, according to PO, slowed down by two years of PiS rule. He also promised to cut the 2008 budget deficit from 28.6 billion to 27 billion zloty. But he also announced increases in public spending (for teachers’ and doctors’ wages, among others), which according to Polish media should cost 4 billion zloty. The opposition described such changes as inconsistent. Tusk replied that the policies of his government should result in revenue increases for the budget.

The 50-year-old leader plans to lower income taxes as well as to liquidate dozens of administrative fees paid by companies. He also aims to make contacts between entrepreneurs and the state administration as easy as possible and less time-consuming. All this would contribute to the “economic miracle” promised by PO in its election campaign. Another source of money for the budget would be the sale and privatization of state-owned companies. Tusk wants to accelerate the process which had been previously slowed by Jaroslaw Kaczynski’s government.

In addition to increasing state revenue, privatization could lessen the influence of politicians on the economy. Tusk also addressed several other issues considered important for his government. He promised reform of the state-financed health care system, which in his words is in a terrible condition. He stressed, however, that the government will not sell hospitals to private companies.

The new government also aims to reform the pension system, which must cope with the aging of the Polish population. Another challenge mentioned in Tusk’s inaugural speech was the development of transport infrastructure. He promised better management of highway construction and the elimination of legal obstacles for partnership between the state and private companies. He also announced reform of the state-owned rail company PKP and pointed at development of the Internet as one of the most important issues for his government.

A deadline for infrastructure improvements should be 2012 when Poland is set to conduct the European soccer championships together with the Ukraine. Tusk guaranteed that Polish people will be proud of the event. The PO leader also set foreign policy goals. He wants to improve relations with Germany and Russia as well as further integrate with the European Union. In the inaugural speech he accepted the EU Reform Treaty in the form negotiated by the former government.

That means Tusk will sign the treaty on Dec.13 but without the Charter of Fundamental Rights which was not accepted by Kaczynski or by Great Britain. According to Tusk, changing Polish currency from the zloty to the euro should follow as soon as possible without any harm (due to rapid price increases) to the citizens. He had earlier pointed at 2012 as a feasible year for currency change.

In his speech, Tusk also addressed the war in Iraq in which Poland has participated since 2003. He said Poland had fulfilled its assignment in Iraq and would pull its troops out of the Middle Eastern country by the end of 2008. The PO leader said the process will be negotiated with the United States and other NATO allies. Opposition MPs criticized Tusk for the length of his inaugural speech and for a lack of detailed solutions for the problems mentioned.

After Tusk finished, Jaroslaw Kaczynski took 45 minutes to rebut Tusk. He said the new government will try to “punish” PiS members who have fought against corruption and unjust privileges in Polish society. After winning the confidence vote in the Sejm, Tusk said that his coalition “can really turn Poland and the life of Polish people for the better.” He also stated that quarrels on the political scene should be replaced by cooperation and dialogue.

The first major test for the new government will be pushing the budget draft through the parliament. Tusk’s cabinet accepted the draft prepared by Jaroslaw Kaczynski’s government, but PO deputies will surely make major changes until the budget goes to a vote in the Sejm on Jan. 21. According to the schedule, the budget will be handed to President Lech Kaczynski four days later. If the work in the Sejm continues through Jan. 27, he will have a right to dissolve the parliament.