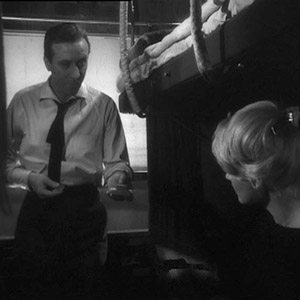 It’s a tough task to find a common thread in the directorial journey of Jerzy Kawalerowicz. The Polish filmmaker and producer embraced many genres, making it difficult to apply an authorial theory to his filmography. Pociąg is a refined who-done-it thriller set in a crowded carriage heading for the Baltic Coast. Jerzy (Leon Niemczyk), a surgeon who has had a hard day at work and tough and enigmatic blonde, Marta (Lucyna Winnicka), chased by an old flame, Staszek (Zbigniew Cybulski), find themselves sharing the same sleeping car.

Inspired by a real-life encounter Kawalerowicz had with a broken-hearted woman on a train, the script pushes the search for a murder suspect among the passengers to the background and focuses on Jerzy and Marta’s relationship. By pushing adherence to the unity of place to the extreme, Kawalerowicz violated the conventions of the Polish Film School. Like the yacht in Polanski’s first feature, Knife in the Water (1962), the sleeping carriage can be read as a closed space impermeable to the rhetoric of war heroism and communist ideology. Niemczyk, underplaying his roles in both thrillers, embodies and symbolises modernity in Polish cinema. A direct-to-video remake of Kawalerowicz’s modern classic directed by Brian King was released in 2009.