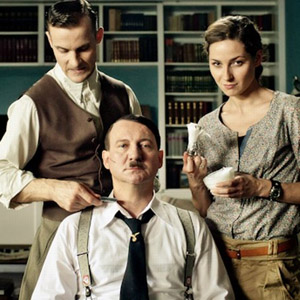 When Dani Levy directed the first German satire about Hitler in 2007, Tagesspiegel wrote that the figure of the Fuhrer was dangerously liable to empathy from the audience. Polish cinema has now also taken its first punt at dealing with the Nazi dictator from a light-hearted perspective.

Comedy fantasy specialist, Juliusz Machulski, met the arduous challenge with a plot set in parallel universes – very similar to his earlier features. A young couple living in Warsaw travel back in time to August 1939, via an elevator. Przemek (Bartosz Porczyk) and Melania (Magdalena Grąziowska) find themselves trapped in the former German Embassy in Poland on the eve of the Nazi invasion.

Despite promotional material heavily emphasising Robert Więckiewicz’s performance as Hitler, he doesn’t make an appearance until the last part of the movie. The veteran actor then chews on the scenery, even taking the liberty to steal the moustache from a cardboard cut-out Charlie Chaplin.

Not every cineaste is able to manipulate history like Tarantino did in Inglourious Basterds (2007). It’s not the risk of feeling affinity for Hitler that is the cause of discontent in Machulski’s comedy, but rather the weak links between temporal settings. After The Great Dictator, it seems that every parody of Hitler on the big screen is doomed to fail.