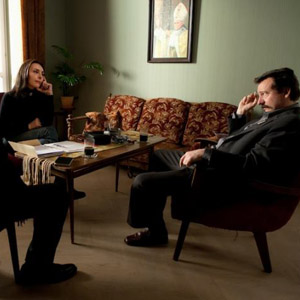 This year has been one of the most trying of Andrzej Wajda’s long career. Wałęsa. Człowiek z nadziei, the third part of his ‘Man of’ trilogy about disillusionment with Communism (Man of Marble, 1976, Man of Iron, 1981) required a superhuman effort to complete. The collapse of the Amber Gold finance company seriously hampered the producers, who were relying on its backing to finish the digital manipulation of old black-and-white footage to include Wajda’s actors.

The race against time was won, however, and Wałęsa. Człowiek z nadziei was presented, out of competition, at both Venice and Toronto. Janusz Głowacki helped Wajda to forge a multi-layered biopic of the Solidarity leader, tinged with irony. Węczkiewicz did not waste this role-of-a-lifetime chance to portray Wałęsa’s vices and virtues as they emerge in a long interview with journalist Orianna Fallaci (Maria Rosaria Omaggio). The conversation with the Italian reporter is used as a framework to demonstrate Wałęsa’s unconditional faith in the clergy, his arrogance, and his anti-intellectual mistrust of the Polish ‘inteligencja.’

Despite the theological overtones of the title, Wajda has avoided moulding a hagiographic portrait of Wałęsa. The film demonstrates once again the legendary director’s appetite and ability to swallow, historicize and rework his nation’s recent history.