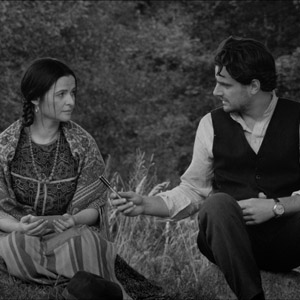 Literature classes about Roma poets remain a rarity. The fact that co-director Joanna Kos-Krauze was able to become acquainted with the verse of Bronisława ‘Papusza’ Wajs at college says a lot about the status the poet acquired in Poland.

The golden couple of Polish filmmaking decided to tailor the first mainstream film devoted to Papusza after hearing her work, Harps (1994) – a sung, Romani piece composed by Jan Kanty Pawluśkiewicz. The role of a legendary poetess who ascribes her misfortune to her literacy went to the Krauzes’ stalwart collaborator, Jowita Budnik. The actress lost 25 kilos and even took harp classes before taking on the role.

The movie displays several episodes from the poet’s life using beautifully orchestrated flat landscapes with moving figures and elliptical editing. The Jarmusch-esque fragmentary look and free hand with chronology runs the risk of less pliable viewers losing the thread. A significant part of Papusza focuses on her platonic and tormented relationship with Jerzy Ficowski (Antoni Pawlicki), the man who translated Wajs’s poems into Polish and popularized them.

Krauzes’ feature is centred around the poet’s tragic persona rather than on her verses, which are barely heard throughout the movie. The Krauzes’ latest effort is an averagely interesting biopic about a great, naïve artist that delighted the jury in Karlovy Vary, as did their earlier Mój Nikifor (2004).