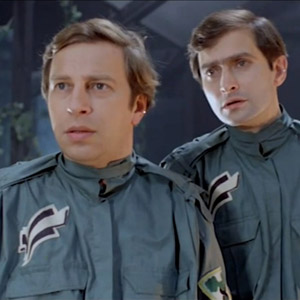 Despite the critics’ reluctance to admit Seksmisja to the pantheon of Polish cinema, Juliusz Machulski’s feature has captivated generations of moviegoers since its release.

The Polish comedy of the century has drawn many comparisons with other notable films that, apart from the inter-gender fracas, actually have little in common. There is no room for the dreamy tone of Fellini’s City of Women (1980) in Machulski’s classic. The homely but stellar sense of humour in Seksmisja is better likened to Woody Allen’s early slapstick features, such as Sleeper (1973).

Playing two unrepentant misogynist propelled into the year 2044, Jerzy Stuhr (Max) and Olgierd Łukaszewicz (Albert), find themselves revolting curiosities in a female-dominated parallel universe. According to an anecdote from the film set, a monkey rented by the producers cost more than Stuhr and Łukaszewicz received to appear in the movie.

Curiously enough, the crew were authentically living in a parallel universe during the filming, which took place under the period of martial law. Following the film’s release, audiences found it hard to take Stuhr seriously as Hamlet in Wajda’s theatrical production, but he has gone on to become one of the nation’s best loved actors.