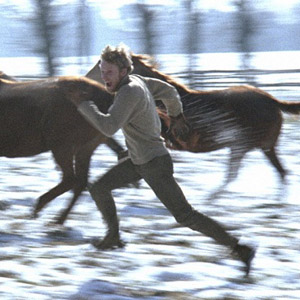 Wszystko na sprzedaż stands out as one of the few examples of Polish cinema to have chosen the path of self-reflection. Conceived as a posthumous homage to actor Zbigniew Cybulski’s, the film is also a revealing portrayal of the embryonic star system that emerged in socialist Poland.

In Wszystko na sprzedaż, several big-screen professionals of the time, and Wajda himself though his alter-ego played by Andrzej Łapicki, dropped their masks and examined their own garrulous and self-referential little world. Wajda once admitted: “Cybulski’s death was as unreal to me as a fictitious episode in one of my films.” Wszystko na sprzedaż is the result of the director’s crisis of inspiration and desperate attempt to direct a feature film about the Polish icon without him.

The reconstruction of Cybulski’s odd death in Wrocław, while trying to jump onto a moving train, is repeated several times in the movie. Wszystko na sprzedaż is anything but a documentary, but Wajda encouraged Cybulski’s closest friends to make personal statements about the dead actor throughout the movie. Kobiela vehemently refuses to reveal any details about Cybulski’s private life in his last days, while his spiritual successor, Olbrychski, pays tribute to him with a splendid idea for a finale that he conceived on set.