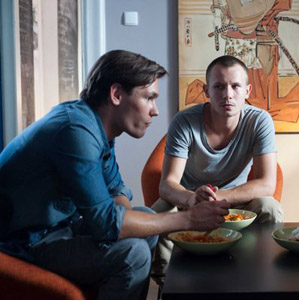 In his second feature, Tomasz Wasilewski has demonstrated once more that the topic of infidelity should not be considered the prerogative of seasoned directors only. In Płynące wieżowce the young Polish director has adopted a pragmatic approach to filmmaking. An art house film wouldn’t have been a good vehicle for the story of a bisexual love affair in Warsaw, probably only alienating the general public further.

Wasilewski’s film is a sober, urban drama about a swimmer going pro. Kuba (Mateusz Banasiuk) discovers his true nature after a pivotal encounter with Michał (Bartosz Gelner), a dark haired ephebe from a wealthy family. This episode brings confusion into the lives of both Kuba’s girlfriend, Sylwia (Marta Nieradkiewicz), and his jealous mother Ewa (Katarzyna Herman). Wasilewski focuses completely on the emotional and sexual tension consuming Kuba, who is unable to avoid hurting those closest to him.

The almost incestuous relationship between the boy and his possessive mother suggests the existence of ménage à quatre, at least in Kuba’s mind. Michał asks his own mother if she wants to meet Kuba, to which she replies in a restrained tone: “Not yet,” a piece of dialogue that suggests Poles are aware of, but not yet ready to accept the existence of LGBT relationships. The hard-hitting epilogue also suggests that the road to that acceptance remains a long one.