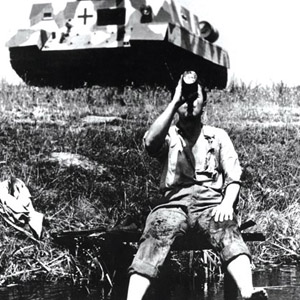 If Andrzej Munk had directed Wajda’s Kanał (1956), the development of the Polish Film School could have taken a decidedly more ironic direction. The only common denominator between Wajda and Munk was the fact that their scripts were both blessed with Stawiński’s fervid storytelling about the Warsaw Uprising.

With Eroica, Munk crafted an incomplete symphony to show that heroism in wartime was often a matter of human shrewdness and luck. Even though the director left out the third movement, leaving this cinematic symphony incomplete, the two remaining stories showed splendidly how Polish intrepidity at the front has often been overvalued on the big screen.

Part one, titled ‘Scherzo alla polacca,’ deals with the harum-scarum mission of Dzidziuś ‘Babyface’ (Edward Dziewoński) as he vainly tries to involve Hungarian artillery in the support of Polish insurgents. The second story, ‘Ostinato Lugubre,’ recounts the miserable lives of Polish soldiers in an POW camp who naively believe that one of their compatriots has managed to escape.

Drenched in buffoonery and cowardice, the character played by Dziewoński is a presage of Bogumił Kobieła’s role as Jan Piszczyk in Munk’s Zezowate szczęście (Bad Luck, 1960). Eroica heralded a possible alternative to the neo-realistic tendency that eventually prevailed among Polish Film School directors.