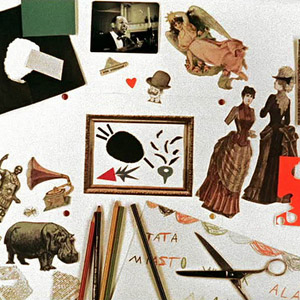 Polish animation has often deliberately used weak narratives to draw attention to the formal aspects of the work itself. Walerian ‘Boro’ Borowczyk and Jan Lenica were a trailblazing duo in this respect at the end of the 1950s. As was the custom for many avant-garde Polish artists of the period, they soon relocated to Paris to continue on their path.

For many years, their most supreme diversion consisted in experimenting without narrative preoccupations. In Był sobie raz (Once Upon A Time, 1957) Boro and Lenica pushed themselves to a new limit by combining cut-out figures with film footage. The main character is a black oval silhouette capable of shape shifting into animal-like figures. At the end of its journey, the ovular character takes refuge in an abstract painting.

Their anti-bourgeois stance, symbolised by irreverently replacing the bowler hat with a paper hat on the head of the protagonist, won some acolytes in Western Europe. It was, however, the surrealistic visual expression of their nonpareil work that charmed the Mannheim and Venice juries.