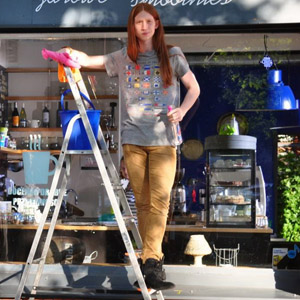 After paying her dues under Roman Polański and Agnieszka Holland, Polish rookie Weronika Migoń finally got the opportunity to debut her own feature, the bitter-sweet comedy Facet (nie) potrzebny od zaraz, starring Katarzyna Maciąg. The film doesn’t yet have an official English title, but translates literally as ‘Boyfriend (not) Needed Now.’

Betrayed by her boyfriend, Kasia undertakes a gruelling journey through Warsaw to discover the reasons behind her ill luck in romance, tracking down former lovers. Migoń has undoubtedly tried to raise her sights beyond the clichés of the unlucky-in-love genre. Facet (nie) potrzebny od zaraz is mainly a comedy of manners centred on the lives of the sophisticated 30-something Varsovians who frequent the cafes of Plac Zbawiciela.

Kasia is certainly less hysterical than any Bridget Jones, but the encounters with her old flames are presented as sentimental sketches direct from the pages of the latest lifestyle magazine. There is not much substance behind the paraphernalia of coffee machines, food trucks and Vietnamese karaoke bars. Despite a cameo role by Israeli writer Etgar Keret as himself, and a highly palatable soundtrack, Migoń’s comedy is a missed opportunity.