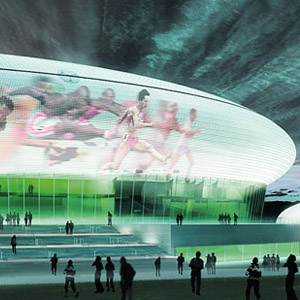 When it was announced that four Polish locations would host matches during the Euro 2012 football championship, Cracovians were disappointed to discover that their city was not one of them. Soon, however, a brand new stadium will put the city on the world map of culture and sport.

Located in Czyżyny, a short distance from the Krakow Plaza shopping centre, the 18-thousand-seat Krakow Arena will be easily accessible from every part of the city when it opens this April.

Małgorzata Przedrzymirska and Paweł Krasuski of the Małopolska Regional Development Agency, invited the Krakow Post for a tour inside the new arena, now in the final stages of construction.

Dozens of workers were busy as Przedrzymirska and Krasuski proudly showed us around the premises At the end of March, Cracovians will also get the chance to look around as the arena flings wide its doors for an official open day.

“Sporting events, concerts, conferences and even film and television productions, will take place in our 61,000 sq m arena. The three-level venue will have 18,000 seats and 27 VIP lounges, including a presidential one, an auditorium for more than 300 people, food courts, multimedia systems and other services that will make it into one of the most modern venues in the world for sport and cultural events,” promised our guides. 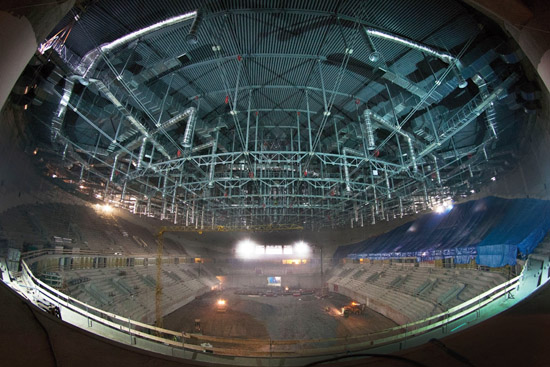 Interior of the Krakow Arena, under construction. (Photo: David McGirr)

One of the Krakow Arena’s main advantages is its permanent roof. The space can be used as a public ice rink, and then transformed into a venue for concerts or other indoor events within hours. With the needs of entertainment events in mind, the roof is rigged to enable the rapid and convenient installation of lights and more exotic stage equipment weighing up to 60 tonnes.

Even more impressive will be the 500-metre-long, 14-metre tall LED screen that will wrap around the entire exterior of the building, allowing events inside to be broadcast live in the outside of the stadium.

In September 2014, Krakow will host the Men’s Volleyball World Championship and World League matches. The 2016 European Men’s Handball Championship will also take place partly in Krakow and the city is also hoping to secure the 2019 Handball World Cup. All these events are planned to take place in the Krakow Arena, but the golden prize would be the 2022 Winter Olympic Games. Krakow is one of the last five cities in contention. If chosen, its brand new arena would host many events.

The cost of the new arena is estimated at almost 400 million złoty. It was financed mainly by the Krakow municipality, an expenditure that attracted protests from Cracovians. When asked why the city had not applied for European Union funds for the project, our guides told us: “Local politics, and disputes between Warsaw and Krakow authorities made it impossible to secure EU support. But today, even those who protested at the beginning are happy that Krakow will have such a modern and unique arena.”