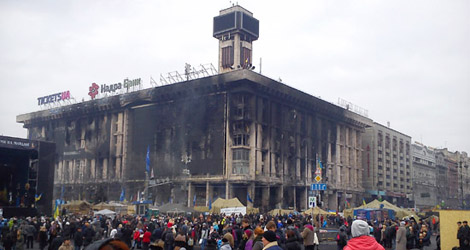 I’ve crossed this border many times before. Always, it’s a few hours wait. Long queues of cars and lorries and busses passing in both directions, all stopped for inspection. This time, it is virtually empty. Passports checked and stamped, we are on our way. No more than a 15-minute wait.

The bus itself is nearly empty too. Who’d be heading into Ukraine at a time like this? Just the night before, the capital was on the brink of civil war. One of my few fellow passengers, a Ukrainian, leans over to me: “You know, there’s no police in L’viv. The emergency services number doesn’t even work.”

I’d read that the police had fled a few days earlier. Conflicting accounts abound. Some said they didn’t want to carry out orders from the central government to crack down on protestors. Others said they feared for their lives when their stations, along with the prosecutor’s office and the appeals court, were ransacked and set ablaze in downtown L’viv.

The reality of the situation doesn’t really hit me until a few minutes later. The bus, approaching L’viv, is pulled over at an improvised checkpoint and briefly inspected. It’s a vigilante group, or ‘Self-Defense Unit’ as the locals call them. “Any titushka? Any berkut? No? You’re free to carry on.” 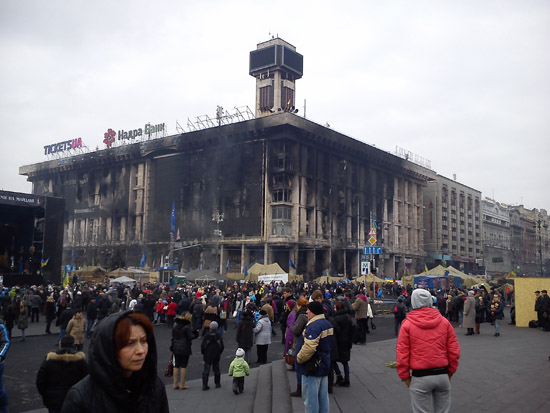 I’m not sure what to expect setting out onto the streets of L’viv this morning. Last night, Euromaidan activists promised an armed insurrection should President Yanukovych not resign by 10 am today. It’s 8 am and the president is still in power. My imagination stirs. Perhaps armed bands of militants roving the streets waiting for orders. Perhaps anarchy and chaos, fire and flames.

But there is none of that. Aside from the steady drizzle of rain, there is silence. An old man chops kindling wood outside the Euromaidan encampment. A few men watch the news on the big screen TV adjacent to the stage. A rough looking, older man in military fatigues approaches me, claiming to be a medic and asking for money to support the Maidan. I give him the few zlotys I still have in my pockets. He is more than pleased. I’m fairly certain he isn’t a medic. And I’m fairly certain the only medical supplies he’s purchasing are vodka.

Ten o’clock comes and passes, and there is not a gunshot nor a cry of ‘Slava Ukrainia!’ Then the announcements come. Yanukovych has fled, his whereabouts unknown. His mansion has been seized by protestors. Key government buildings have been taken. Ukraine is without a government.

I wait for the militants, for the anarchy and chaos. But it never comes.

This is what anarchy looks like, I guess. This is life without law. 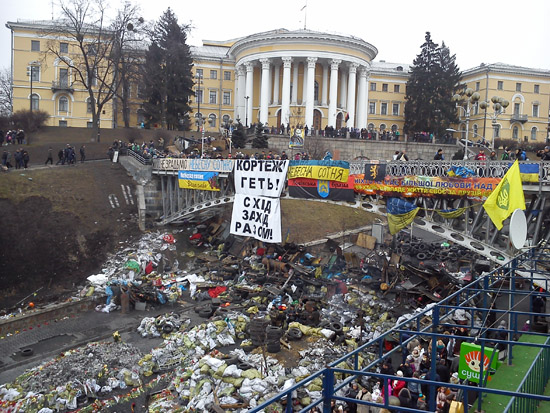 The crowd at the L’viv Maidan grows as the day wears on. Gaggles of onlookers brave the rain to watch the news unfold on the big screen. An activist tears down banners with anti-government slogans and replaces them with portraits of those slain in the days prior. Where is the jubilation? The celebration? Yanukovych is gone and you’re free! No?

Sure, the citywide prohibition on alcohol after 6pm must take some of the blame, but there is more to it than that. As I talk to people, I learn that, despite the day’s victories – Yakunoych’s fall, Yulia Tymeshenko’s release from prison – the city is in deep mourning. Thirteen citizens of L’viv were slain in clashes with government forces – the highest death toll of any city in Ukraine. And though Tymeshenko’s release stirs the passions of some, many view her lionisation on Kyiv’s Maidan stage as a return to the old order. What then did those 13 L’vivians die for, they ask.

The rain continues to fall and the crowd dwindles and the night passes without incident. Roving bands of baby-faced boys, no older than 16 or 17, patrol the streets armed with improvised wooden batons. The news reports a 300-percent drop in crime since the disappearance of the local police and their replacement with Civil-Defense Squads. They must be doing a good job. 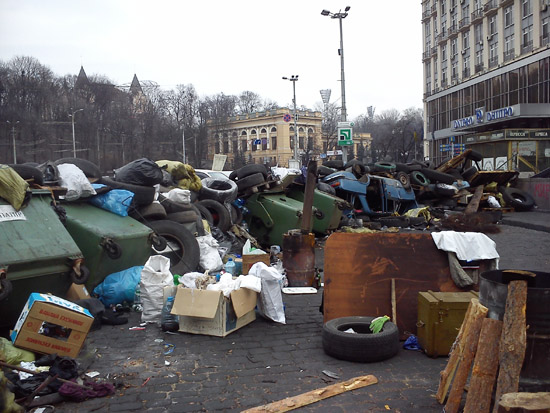 Sunday comes, the day of funerals. Sobriety and solemnity still grip the city. The rain holds steady. Some police have returned. They help cordon off the streets to accommodate the masses attending the Maidan’s memorial services. Priests and family and friends eulogise the dead from the stage. Memorials are erected and sprawling constellations of candles grow. Throughout the day, liturgies and hymns ring through the streets.

This was not a victory, I realise. This was a tragedy, a massacre. Seeds have been planted for new a state, a new future, but L’vivians are sceptical whether the bloodshed was worth the fruit that has yet to come. Or if it will even come.

It’s Tuesday, and the L’viv division of the Berkut is paraded on stage. They kneel before the crowd, they beg for forgiveness. I wonder if this is sincere or the result of fear. It’s hard to tell during times like these. Perhaps both. Or perhaps there’s someone offstage, miming a sliced throat. 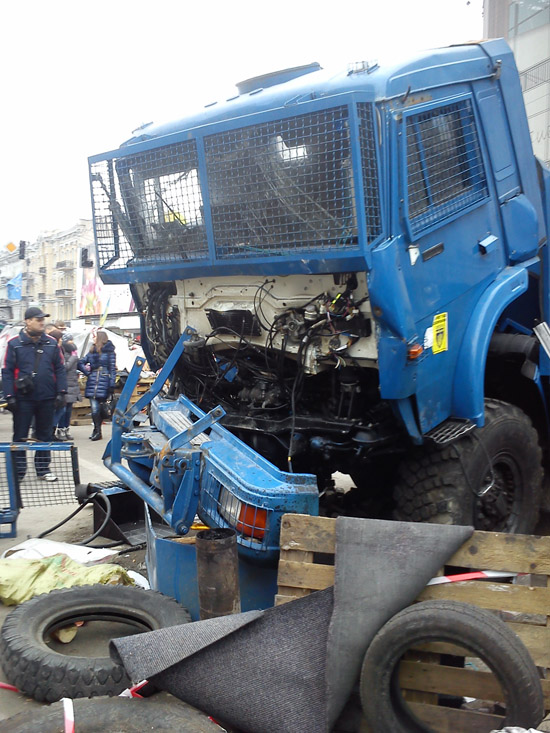 I finally make it to Kyiv on Thursday, the birthplace of the Euromaidan movement, the place where 75 activists died less than a week earlier. ‘Apocalyptic’ is all I can think. The ground, stripped of its paving stones, is soiled with a thick layer of ash and soot. The earth is scarred and the monuments are scorched and the buildings are charred skeletons.

The barricades still stand – snarling walls of tires and barbed wire and scrap metal and ice and military machinery. The scent of burnt rubber loiters. Demonstrators burn rubbish in steel drums to keep warm and wafts of smoke wander the Maidan like wounded ghosts. Children climb upon weary catapults and pose for pictures. Balaclava-masked boys, wielding golf clubs and dismembered table legs and baseball bats, rosary beads slung around their necks, guard the banks and shops and keep order.

There’s a greater sense of victory here, in the smouldering epicentre of Euromaidan. The demonstrators proudly display their war booty: Captured police vans and other assorted riot gear. There’s laughter and chatter about Maidan, no doubt helped by photos of the pornographic levels of kitsch inside Yanukovych’s mansion circulating on social media. Babushkas are taking selfies in front of rubble and ruins. Chants of ‘Glory to Ukraine!’ and ‘Glory to the Heroes!’ and ‘Glory to the nation!’ resound through the square. 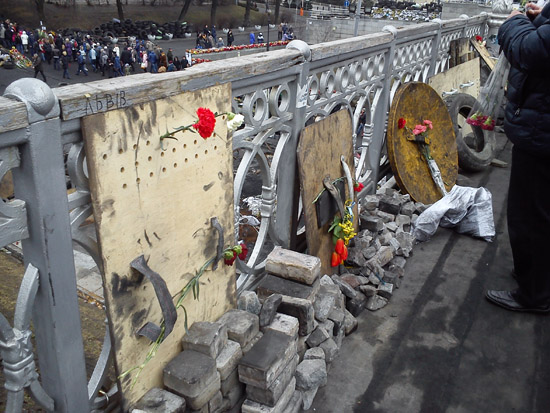 March 1st, the dawn of spring. Forests of flowers and bouquets begin to grow – mounds and mounds of them, delivered by those who’ve come to grieve. Over the next few days, the barricades begin to recede and hide beneath thick layers of funeral flora. Memorials are constructed from weaponry and homemade shields and forgotten combat boots, carnations and roses and tulips sprouting from every nook. I’m reminded of a documentary I saw about Chernobyl, how a pristine nature reserve has paved over of one of Europe’s grimmest manmade disasters.

But now, surveying these consecrated grounds of terror and joy, of honour and heroism, of death and destruction, of will and might, of tyres and bricks and broken glass, I hear the sound of the war drums in Crimea growing louder. Fifteen thousand Russian troops have landed in Crimea, they say, with more to follow. The Ukrainian military has been activated for combat. It’s not over, everyone here knows. I think of the men and women who gave their lives here. I try to look at the wreckage and rubble and wonder what might grow from this. But I can only think of Yeats: “A terrible beauty is born.”

10 thoughts on “Notes From Ukraine: A Terrible Beauty”