Toro was in town last week, on a four-day bender, determined to get totally smashowskied by Sunday night, so the obvious questions were ‘where’ and ‘when?’ He explained, in his own undiplomatic way, that from his experiences in Krakow, he’d become so used to being on spontaneous four-day benders, why not plan and execute one with care?

His plan was simple: start with Thursday’s party, through to Sunday with mornings and afternoons included if others were prepared to imbibe, supply, and socialise in the company of himself.

By coincidence, a dreaded friend told me she had a copy of the book I was looking for, as I had, by then, every intention of seeing the film that it spawned. Books are often spoiled when you meet the celluloid equivalent before the print. And so, with my brotherly mission of accompanying Toro on the road he had chosen of four nights and three days on the session, I finally settled down to read.

I had wanted to do this over the weekend, but my little mission had got in the way. I had got to the end of the first paragraph: “Before the mafiosi appeared in my apartment” is not a good opening, even for a work as short as this one. It didn’t help that the protagonist, Jerzy, had, for the previous day and a half, been contemplating one last final love after a lifetime of alcoholism and dissolution. By drinking peach vodka. In our adopted homeland, there’s no shortage of choice when it comes to the flavoured varieties of the grain. I’ve never tried peach as it is my wont to pop wisniowki or go orzechowki. Any any rate, my new-found insomnia worked well enough to keep me on the story through the night. Jerzy’s forward-looking sense of saudades was enough to make me wonder if this was art imitating life. 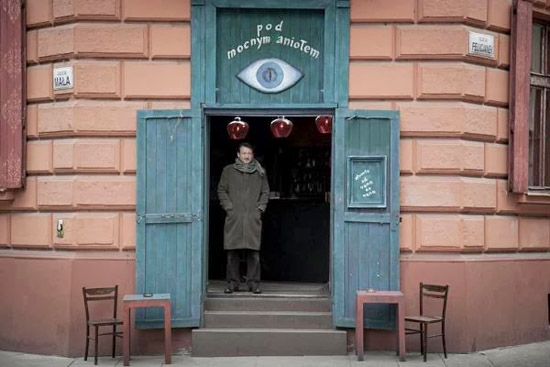 Angels are in short supply these days. Pilch’s novel Pod Mocnym Aniołem is perfectly acceptable in its own right, on paper, without intruding on the lives of real people. Filming, however, resulted in my being barred from my local lokal four times in the one year, cztery pory roku I was excluded. It didn’t help that all others had been as well. At times, access to the street blocked by goons in uniform. My own building had a new facade over the door, and, as entering, I encountered Jerzy in the shape of Wieckiewicz upon a chair before the tiled stairs into the building.

Deference or indifference? Who knows?

What we do know for sure is that on the Wednesday of last winter’s exclusion (and remember how long that lasted compared to this?) the bookstore up the street was packed and ran quickly out of its supply of grapes. Normally, kinda intense bookworms sip the wines and gulp down their lit. When the sun had past the yard arm, the refugees descended and devoured first the reds, then the whites. Closing when nought was left, they scattered to different parts of the city, some even beyond the Dietla tracks to Toytown.

Pilch’s novel is about alcoholics. And their experiences on the alco ward. It’s extreme. Why is it set in Krakow? Well, why not? I haven’t got to the end yet. Nearly there. But I’m confident there will be a satisfactory outcome, voracious in its verisimilitude. After all, it’s fiction. It has to make sense. Real life is much richer and darker than that.

3 thoughts on “Bull on the Page: The Almighty Angel”