I live in Poland – that’s my country of residence, but I’m not Polish. My driver’s license, issued in my home country, is expiring. According to EU regulations, I need a new one issued in Poland.

I asked my consulate about the procedure and which documents I would need. They sent me a complete list of the documents, including their Polish names, and advised me to take action six weeks in advance.

First, I had to take a medical test. I choose a private clinic, because normally I can speak English with the doctors. Not this time. I had to deal with a very unfriendly lady who refused to or could not speak English. I had to manage with my pidgin Polish.

After that, I went to a municipal department with all the documents, handed them over and paid 100.50 złoty, at a separate desk of course – two queues are better than one in all dealings with Polish bureaucracy.

Surprisingly, the desk officer told me that I would receive an SMS asking me to come and collect my new license within two weeks. Not in the same building of course, somewhere else.

As promised, I got the message within two weeks, and picked up my shiny new document.

It wasn’t until I got home that I read the license more carefully. It’s expiration date was the same as my old license – the one I wanted to replace because it was almost expired.

I returned to the office and pointed out the absurdity. They were unimpressed, explaining that I first needed to get a Polish license before I could apply to get another one that wasn’t just about to expire – “It’s the procedure,” they shrugged.

I had to ask for a new license, then stand in the queue to the separate cash desk again, pay 100.50 złoty again, and wait two weeks, again. 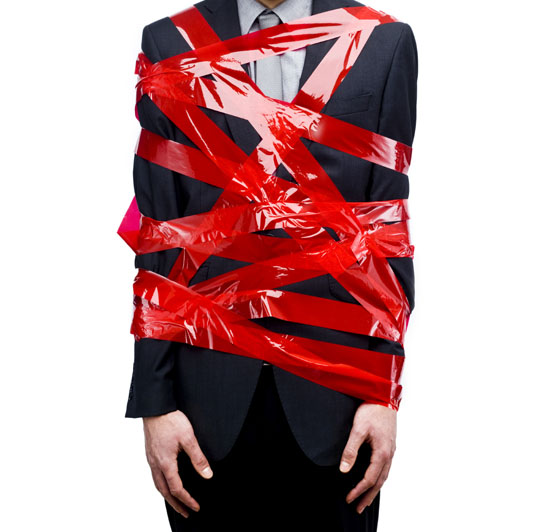 This was not an isolated case. I could recount dozens of similar stories about the plain stupidity of bureaucratic procedures here. Most agonizing of all is that the civil servants involved have no interest in whether these procedures are sensible or not.

The individual who staff these offices are robotnicy – the standard Polish term for workers, which I can’t help using because it sounds like ‘robots.’ They should be the face of a public service, but they neither understand nor care about the public. No wonder there is so much tax evasion if the proceeds go to pay these guys.

Red tape is hindering the effective and efficient functioning of Polish society, which is bad for the economy and the country.

I don’t think that the robots are aware of that. Perhaps an awareness campaign and training could be a first step. Firing 20 percent of the robots might be another contribution. The set-in-their-ways oldies can take care of a their children and grandchildren. They can keep 70 percent of their wages, freeing the economic development of the country from the dead hand of bureaucracy.