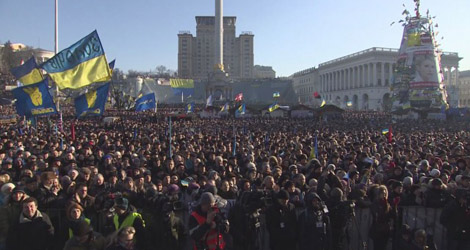 Though today was a day of victories for many citizens of the ardently pro-Western city of L’viv, it’s clear things still haven’t completely returned to normal.

Activists still man check points on roads leading into the city and the streets are patrolled by baby-faced boys wielding wooden planks, their squadrons filling in for a police force that chose abdication over following orders from the central government.

What should have been an all-out celebration in L’viv this evening – after all, Yanukovych was ousted and Tymeshenko freed earlier today – was tinged with a palpable shade of sorrow and sobriety over those killed in the last few days. Of those martyred in Kiev, thirteen were from this seat of Ukrainian nationalism.

The tears of those lighting candles in remembrance mingled with the steady trickle of rain. Cries of “Glory to the Heroes” were at once jubilant and memorial. Speeches were watched with grave solemnity and hymns were sung.

In fact, most L’viv Maidan activists seemed to have taken the night off. Though their ranks had swelled to several thousands in recent months, only a couple of hundred showed up on this historic night, and dispersed by midnight.

“The terror is passing away now”, Roman, 31, a lawyer from L’viv says. And for him, the recent developments don’t constitute a total victory. “I don’t have many hopes for Tymeshenko. I think of all the people who gave their lives, but for what? The same people to come back into power? After recent events, we shouldn’t have any of the old order. The people now should have control, ” he says.

Slightly more ecstatic, and perhaps a bit buzzed, 39-year-old Taras makes his way through the crowd shaking hands with fellow protestors. An engineer, who identifies as part of Pravy Sektor, he says he visited Kiev three times to take part in Maidan protests.

“I have a wife and three kids. I had a lot to lose. Despite that, I still fought,” he says, grinning widely. But was this the outcome he’d hoped for? “The protestors had no arms. But if they did, they would have destroyed the special forces.”

“Today was a victory,” Andrei says, “but the people will only leave after the authorities have completely changed. Also, Kiev was a success, but we’re still waiting for the governments in the east to change.”

“There’s a lingering fear that leaders in the east want to divide the country in two,” he adds, suggesting this could also partially account for the lack of victory dances.

In a cafe nearby, Orisya and Haly, both 20, sip a tea and discuss their hopes for the future of their country. “They can split the country in two, the east can leave. I don’t care,” Orisya says, “I just want an independent Ukraine.”

“Today was my birthday. And this was the best birthday present, this victory,” she continues.

8 thoughts on “Live From Ukraine: A Subdued Victory”