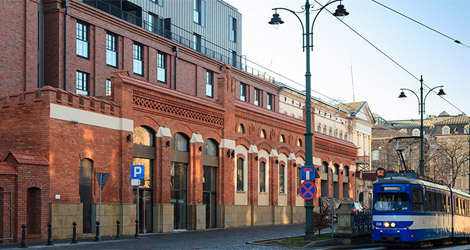 More than ten years since Carlsberg ceased to produce beer at what was formerly the Okocim Brewery on ul. Lubicz, the construction hoardings are at last coming down to allow public access.

The brewery on ul. Lubicz started its life in 1840. Production at the site was finally suspended under Carlsberg in 2001, and the two hectare plot with accompanying buildings was sold to US real estate investor, Pandion, at the end of 2005. The new owners eventually decided to pursue a masterplan for this important site together with the City of Krakow.

The result was a success but the global financial crisis hit Pandion’s financial partner, New York based Ospraie Management, hard and a decision was made to liquidate the fund and sell the property. Shortly afterwards, Leach & Lang Property Consultants introduced British investor, Balmoral Properties, to the site with the final purchase contract for the plot being signed early in 2010. Mofo Architekci were soon contracted to work up detailed plans for the project and demolition work began in mid-2011.

Austrian general contractor, PORR, began in earnest at the end of 2011. The former malt-house, a 1,000 square metre half-timbered building on the corner of ul. Lubicz and ul. Strzelecka, has been completely refurbished and will shortly re-open as a micro-brewery. The brick-built former boiler-house has also been renovated and now has a mezzanine level inside providing almost 1,000 square metres of open-plan office space. The piece-de-resistance is the restored 2,000 square metres Goetz Palace. Its ground floor will be home to the Hungarian Consulate, the rest will be office space.

The commercial side of the development is not confined to the historic buildings – the ground floors of both of the main new-build residential buildings will also have a retail use. Upmarket food retailer Piotr i Pawel have already signed a lease for a 1,100 square metre delicatessen and will shortly be joined by a travel agency, dry cleaner, chemist and cafe. There are still several hundred square metres left for rent with a bank, a newsagent, a hairdresser, a florist, spa and gym being sought to round out the retail offer for residents.

Aside from the interesting mix of new residential and historical commercial buildings, potential buyers and tenants have been attracted by the city centre location and the carefully-selected mix of commercial tenants making the scheme largely self-sufficient, with shopping, services and leisure facilities all available on site.

Subsequent phases of the project will enrich the scheme further. Balmoral Properties have already begun tendering for the construction of both second and third phases of the project, which are increasingly likely to be developed simultaneously. These phases will add a further 163 apartments (closing the total number for the scheme at 300) across four separate buildings as well as a stand-alone 5-storey, 5,200 square metre, A-class office building visible from ul. Lubicz. Were construction to start around Easter 2014 then the whole project could easily be delivered by the end of 2015.

Several sizeable city centre developments that have been delivered over the past decade in Krakow, but either of a predominantly retail or residential nature. Browar Lubicz is perhaps the only scheme that can truly claim to be mixed-use. Will the success of this scheme lead to more mixed-use developments? Which other post-industrial plots or areas of town will be revitalised next?