If summer is the silly season for news, the middle of winter is the dead boring season. We get the same stories every year. Either everyone is wondering where the snow is, or snow is causing national chaos. Either everyone is moaning that Poland never gets anything at the Oscars, or suddenly everyone is fascinated by costume design.

Without fail, the light-hearted story at the end of dead-boring season news features semi-naked Slavs plunging into holes cut into frozen rivers. Bodies of fresh water only become attractive to the peoples east of the Oder if they have to get at them by taking an axe to six inches of rime.

According to legend, the Slavic nations were founded by the brothers Lech, Čech and Rus – the fourth sibling with the fetish for sub-zero H2O has been airbrushed out of history, but his genes live on.

Krakow does not escape the madness. For nine months of the year, nobody puts a toe in the Vistula. As soon as temperatures drop to the point where it’s no longer entirely liquid, some dudes with bright pink bodies and flamboyant moustaches turn up and dive straight in. 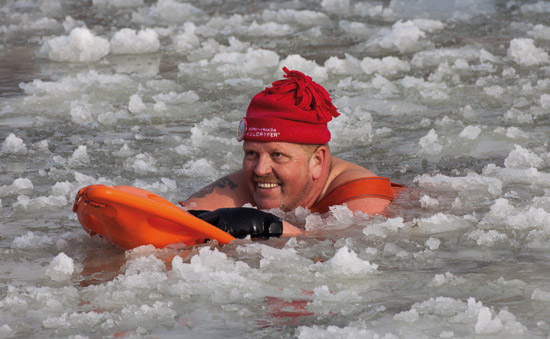 I wouldn’t want my head to get cold.
Photo: Piotr Mleczko

It’s the same kind of glorious perversity that has resulted in the country’s most celebrated festival of sea shanties becoming established in a city resolutely 600 km from the nearest salt water – roughly equivalent to the World Tanning Championships being held in Scotland, or a major football tournament in Qatar.

For me, the primary consideration in propelling myself semi-naked across frozen rivers would be to get back to the side I left my towel on. I’m reminded of the old joke in which the schoolboy is unimpressed by Byron swimming across the Hellespont three times before breakfast: “Why didn’t he make it four, to get back to where his clothes were?”

While I’m on the subject of the wrong side of rivers, the south bank of the Vistula plays a prominent part in the collective psyche of Cracovians. This is, of course, because it is directly opposite Wawel Castle – regularly described as the heart of the city, which I guess it is, in the sense that it’s entirely supported by tourism and regularly exploited by politicians.

The question of what should or shouldn’t be allowed to exist ‘near Wawel’ has become a powerful totem of Cracovian, and national, opinion. The balloon was an outrage, because it was near Wawel. The planned bridge is barbaric, because it will be visible from Wawel. The coincidentally-helpfully named ICE conference centre is a scandal, because it’s opposite Wawel.

Naturally, nobody who lives in Krakow ever actually goes to Wawel, but if you do take the time to climb the hill and look out across the semi-derelict vista that is Podgórze and Dębniki, it’s hard to imagine anything spoiling the view. It’s largely a landscape of decaying early 20th-century tenements with the occasional petrol station. What, exactly, is the outrage of a 400 million złoty development amongst that lot?

I tend to agree that there’s nothing architecturally ground-breaking about the ICE, or the bridge plan, or the various south-bank residential developments, but at least they’re something new to look at. Does anybody remember what was on the ICE site before? Was it worthy of being ‘opposite Wawel’?