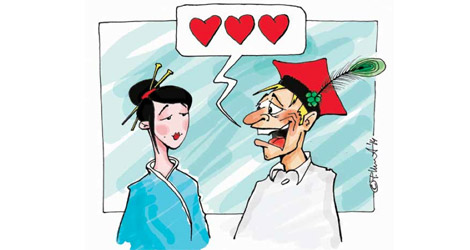 These are some of the reasons that lure men and women the world over to leave it all behind in search of a new home in Poland.

Then there are people who come for love.

Take Jonathan Ornstein, the 44-year-old director of Krakow’s Jewish Community Centre. A native New Yorker, in 2000 he was living and working on a kibbutz (a collective agricultural community in the Israeli desert) when he met a Polish student volunteer.

A year and dozens of emails and long-distance phone calls later, he found himself in the post-boom industrial city of Łódź, some of the only Polish he recognized being the scrawls of ‘ŻYDZI DO GAZU’ (‘JEWS TO THE GAS’) across the grey walls.

“That first year was very difficult,” he admitted, having spent much of it reading every book at the local British Council while his girlfriend finished her master’s degree. “But we were both very stubborn.”

“Completely irrational,” in the words of Amanda, an Australian EFL teacher who came to a country she had always imagined as “backward, bleak, and grey,” all for a Polish man. “However,” she said, “the urge to chase love more than halfway around the world was the most compelling driver.”

In some ways, it’s an old story from days even before Helen’s face launched a thousand ships. For much of European history, when kinship between clans, ethnic groups, and alliances rivalled the significance of territorial borders, it was not uncommon for young lovers to be married off abroad. But often it was for shrewder economic or political reasons – gaining a good dowry; reaffirming a political bond – and to people they had never met.

It wasn’t until relatively recently that romantic love became widely accepted as the basis for relationships in Western societies. And the phenomenon of the long-distance relationship – in many cases with no physical foundation whatsoever – is something that only the technology and globalisation of the past 20 years have allowed with any ease.

So in another sense the expats here for love – no strangers to pale blue midnight Skype chats with their sweethearts (and now with their families); to broken haggling with wrinkled Rynek florists; to the quixotic calculus of EasyJet fare comparisons – are pioneers, turning traditional ideas of relationships on their heads.

Of course, there are always challenges for anyone living in a country with minimal knowledge of the culture or language. But these expats face the added hurdles of actually dating someone across those barriers.

“There was a lot of Google translate happening in the beginning,” says Hannah, 25, an American teacher who came on a Fulbright scholarship and stayed for a Polish composer, “Our whole first date would have been a disaster without it.”

And what of the finer points of communication – arguing about taking out the trash? “I have to think before I speak,” she says, though her Polish is improving, “and that’s probably a good thing.”

Ewa, a 29-year-old English philologist from Poland, says she’s fortunate that the cultural differences between her and her expat husband Tim, an IT specialist, don’t extend much beyond language. Which may come as a surprise, as Tim, 31, is Kenyan and they were married in Nairobi. Of course, this brings about a culture clash of another sort: occasional racism and constant curiosity in a country with a black population of less than .1 percent. “My friends ask all sorts of funny questions,” she says with a smile, “like, can they touch his hair? Can he get sunburned?”

Then there’s American journalist David, 28, the Jewish grandson of Polish survivors of the Holocaust dating a Jagiellonian University student he connected with online through his blog. “My grandparents loaded me with such a negative image of Poland and Poles, it sometimes feels like treachery, or just plain wrong,” he confesses, adding that his partner’s Catholicism also introduces a clash of culture that he “consciously tries not to think about.”

Sound complicated enough? They’re also both men. David, who has lived in New York and Tel Aviv, says, “I come from places where gay men and women hesitate very little, if at all, to hold hands or kiss on the street. So, the atmosphere in Krakow is tough and leads me to restrain myself in ways which I am not comfortable with nor proud of.”

Then again, being a gay man in Poland isn’t all bad: “If you have a weakness for blond hair and blue eyes,” David tells me, (nearly) echoing heterosexual male expats across the country, “Poland is nothing less than paradise.”

And what happens next in these love stories? After the feverish internationally-posted letters, the grand move, the whirlwind weeks of finally being together in a foreign country? Even for those who stay together, the realities of everyday life, and of the future, remain.

For example: Is Poland home?

“This one’s the big question for us right now,” Hannah says, “because for me I still feel like home is in the States, while for Paweł home is definitely Krakow.” In June, at the end of her teaching contract, she’ll be faced again with the decision to stay or go, and she has yet to make up her mind.

In Jonathan Ornstein’s case, the relationship that brought him to Łódź and then Krakow with no Polish and no job ultimately ended, something he blames in large part on the strain placed on them in the first year by his dependency on her. Yet 13 years later, a fluent Polish citizen with a different Polish girlfriend, he’s a confirmed Cracovian who compares directing the 500-member Jewish Cultural Centre with having 500 children. “I fell out of love with her,” Jonathan says of his ex, “and I fell in love with Krakow, the most beautiful city in the world.”

“Do I miss the palm trees and surf beaches?” reflects Amanda from Australia. Her story ended differently: her Polish boyfriend became her Polish husband.”‘Of course. But I found my Prince Charming, and he just happens to come from a charming city with a castle and horse and carriage of his very own.”

Note: Some names and details changed on request to protect the anonymity of the sources.

4 thoughts on “To Krakow with Love: Immigrating for Romance”