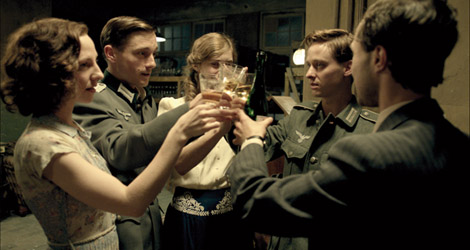 A veteran of the Armia Krajowa (Polish Home Army) has filed a civil case in the Krakow District Court against controversial German TV drama, Our Mothers, Our Fathers, which is set during World War II.

The former soldier, whose name has not been made public, joined forces with the World Association of Home Army Soldiers (Światowy Związek Żołnierzy Armii Krajowej) to file a case against the series’ producer, Nico Hofmann, on the grounds that it tarnishes the reputations of Poles who fought against Nazi occupation. Attorney Monika Brzozowska, with PDB, the law firm representing the complainants, confirmed the court’s civil department had received the summons.

The drama has caused considerable offence among many Poles for its depiction of Polish Home Army soldiers displaying anti-Semitic sentiments. It has also been accused of implicating Poles in the atrocities of the Holocaust and playing down German responsibility. In one scene, a Home Army soldier boasts: “We drown Jews like rats,” while his compatriots are shown refusing to help Jews bound for Auschwitz.

The series was commissioned by German public broadcaster, ZDF, and broadcast in German and Austria (as Unsere Mütter, Unsere Väter) in March, 2013, finding a large audience and critical acclaim. The three, 90-minute episodes were shown by Polish broadcaster TVP in June (as Nasze matki, nasi ojcowie). It achieved record ratings, but also provoked anger among Poles who regarded its depiction of Home Army combatants as grossly unfair.

The series’ producer is accused of numerous violations, including the infringement of personal rights, the right to national pride, the right to cultivate national identity and has also been described as offensive to the memory of the Home Army soldiers who fell during the war.

The complainants in the Krakow case want a notice stating that Germans alone were responsible for the Holocaust to be shown before any episodes are broadcast. The also demand a public apology from all television stations that have aired the series, compensation of 50 thousand zloty and the removal of Home Army emblems and badges from the film.

The right to the series have been sold in Ireland (where it was broadcast in November), and the United States and the United Kingdom, and is due to be shown in both countries in 2014, titled Generation War.

The court action in Krakow follows high-profile criticism of the drama earlier this year from the Polish ambassador in Berlin, Jerzy Margański, who sent an open letter of complaint to ZDF in which he called the series: “Grotesquely one-sided.” The Polish ambassador to the United States, Ryszard Schnepf, also wrote a letter of complaint to distribution company Music Box, who bought the US rights to the series.

This is not the first legal challenge to the drama. The Warsaw District Court is processing a similar civil case brought by a Polish citizen against the use of the term ‘Polish death camp,’ in one episode of the series.

In June, series producer, Nico Hofmann, apologised for causing offence to Poles during an interview with Polska The Times. He said: “It was a mistake not to consult with Polish historians… this is a lesson for me. I am sorry we offended the Polish people.”

The case highlights just how sensitive Poland is to international perceptions of the conduct of Poles during World War II. There is a fear that, because the Nazis constructed much of the machinery of the Holocaust on Polish territory, Poland may be perceived as complicit. There is, for example, a long-running campaign to object to the phrase ‘Polish death camps,’ because it suggests Poles were involved in their construction. It was only in May of last year that President Obama was forced to apologise for using the phrase.

It is also not the first time that Polish sensitivity on the subject has been irritated by cinematic representations of World War II and the Holocaust. Claude Lanzmann’s epic 1985 documentary, Shoah, caused similar stirred emotions. Lanzmann controversially featured an interview with Jan Karski, but chose to omit details of Karski’s daring escape to the West to inform British and American leaders about the Holocaust, and seek their help. Lanzmann was accused of deliberately omitting these scenes to cover up the seeming indifference of Britain and America to the plight of the Jews, while also overplaying Poland’s anti-Semitism.

Another example of a controversial, high profile work on the subject is Jan Gross’s 2001 book Neighbours. The book focuses on the 1941 pogrom in the Polish village of Jedwabne , an event in which a large number of Jews were brutally murdered by their neighbours. Gross caused great offence by claiming Poles were solely responsible for the atrocity.

Neighbours inspired the play, Our Class (Nasza klasa), by Tadeusz Słobodzianek, which was awarded the Nike Prize in 2010, the most prestigious literary prize in Poland, reflecting the readiness of Poles to engage in discussion on this difficult issue.

In his letter of complaint about Our Mothers, Our Fathers, Jerzy Margański criticised the one-sided perspective of the drama, saying that, watching the programme, no one would know that there were “so many trees planted for Poles honoured as Righteous Among the Nations in Yad Vashem.” There are more Poles honoured at the Holocaust Memorial Museum in Yad Vashem than any other nationality. These 6,394 Polish civilians, who risked their lives to save Jews, are a source of great pride in Poland.

The trail is due to commence in the next few months.