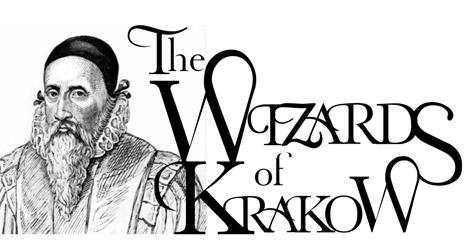 One was an accomplished mathematician and shrewd political navigator, serving as trusted advisor to Britain’s Queen Elizabeth I. The other was a mysterious and far-travelled young melancholic, possibly an outlaw, in possession of a vial of red powder and a still-undeciphered book. With these he claimed he would one day be able to achieve the holy grail of alchemy – the transmutation of base metals into gold.

When the unlikely pair of John Dee and Edward Kelley met in 1582, it was the start of a seven-year partnership that would explore the great kingdoms of Central Europe as well as the depths of mysticism and human spirituality. But this was the Renaissance, and the boundaries between science, religion, and magic that we take for granted today were only beginning to appear.

At 55, Dee was already influential, well-travelled and somewhat famous in his homeland, though at times slandered as a mere ‘conjuror.’ Yet he became frustrated in his search for understanding of the universe through strictly materialistic means, and turned instead to communicating with angels. Enter Kelley, a self-proclaimed scryer – reader of crystal balls. After some scepticism, Dee took Kelley on. They began conducting ‘spiritual conferences,’ sometimes hours-long scrying sessions during which a diverse host of angels and demons spoke to Dee through Kelley in Latin, Arabic, Hebrew, and Enochian – their native, magical tongue. 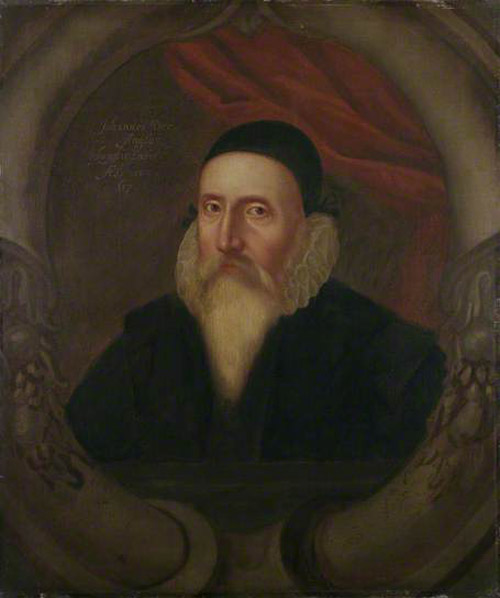 It was these angels who encouraged Dee to try his fortunes across the English Channel. As the angel Gabriel would tell him later in Krakow: “Happy is he that hath his skirts tied up and is prepared for a journey.” The following year, he and Kelley set off with their families at the invitation of long-bearded and extravagant Polish hero-prince, Albert Łaski.

They arrived in Poland and ultimately Krakow (then the capital) only to find that their ‘patron,’ Łaski was, in fact, in debt and viewed with suspicion among his peers. Furthermore, though King Stefan granted them an audience and even sat in on one of their spiritual conferences, he remained sceptical of their endeavours and their promises to produce the fabled philosopher’s stone, declining to sponsor them.

Nevertheless, they spent some time living at a cramped house in Krakow (thought to be somewhere on present-day ul. Szczepańska) where some of their most important and chaotic dealings with angels took place. 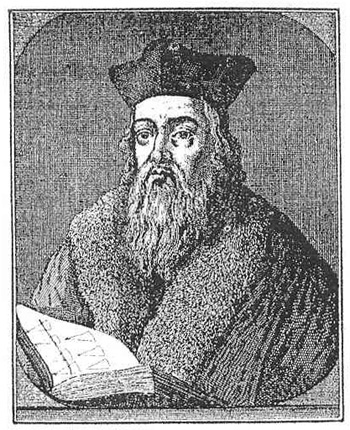 Kelley, who by all accounts was both more histrionic and financially-motivated than Dee, often felt he was wasting his time. He summoned devils or more mischievous angels – something akin to traditional English fairies – who would torment him, lie, or throw books and furniture about the room. At other times he became despondent. “What is the use in going on with this farce?” he cried once, before storming out, refuting all the spirits and expressing his desire to burn all their books. But Dee was wheedling and patient, content “to goe up and downe England clothed in a blanket, to beg my bread, so that I might at the end be assured to attaine to godly wisdome.” And Kelley kept returning.

Despite the darker side of their relationship with their otherworldly guides and, increasingly, with each other, Dee and Kelley managed to transcribe an Enochian alphabet with English translations from the angels’ rambling dictations. Later, during their travels between Krakow and Prague, the spirits ultimately revealed the formula for the philosopher’s stone, except of course it was delivered in technical angelic jargon that rendered it practically useless. 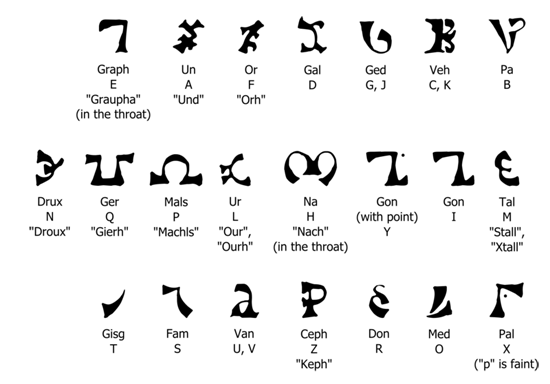 Dee and Kelley’s Enochian alphabet, for transcribing the language of the angels

In the end, though, Dee and Kelley went their separate ways to meet equally dismal fates. Dee returned to England to find his home and library ruined, and his friends alienated or dead. Kelley’s star rose for a while after he successfully convinced powerful patrons, including Holy Roman Emperor Rudolf II, that he had mastered alchemy. In fact, he was so widely persuasive that Richard Byrne, author of the 2010 play about Dee and Kelley Burn Your Bookes, wonders if in fact Kelley did master some kind of hitherto undiscovered trick of extracting gold from ore. However, this widespread celebrity ultimately bred distrust, and Rudolf took Kelley into ‘protective custody’ in a Czech castle in an attempt to finally compel him to mass-produce gold. He died, attempting to escape, at the age of 42.

The era of magic and alchemy eventually gave way to the era of science, and Dee and Kelley, if they were remembered at all, were dismissed as ludicrous practitioners of a fallacious art, or as outright charlatans and black magicians. It was only at the beginning of the 20th century that they began to be reevaluated, especially Dee’s legitimate contributions to the scientific and political thought of an age when one could speak of theorems and angels in the same breath without raising an eyebrow. Today as well, as evidenced at least by the writing of this article, the story of their quite difficult lives and the legends that surround them provoke a sense of charm and imagination in the reader. Perhaps, then, lead can be transformed into gold after all.

4 thoughts on “The Wizards of Krakow”