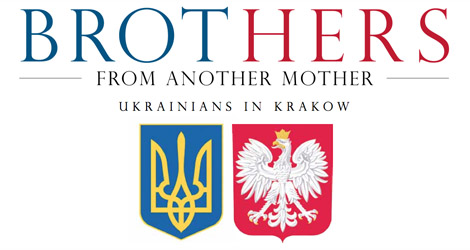 Just a short stroll through Krakow’s Old Town reveals the cosmopolitan nature of the city. Gaggles of Erasmus students bounce from lecture to lecture, international businessmen dash to meetings and signings and openings, workers from all corners of the globe banter in bars in many tongues.

While it may seem easy to spot the non-natives prowling about the Rynek, whether due to their complexion or clothing or half-stuttered attempts at Slavic syllables, one of the largest international groups in the city is also the least conspicuous – the Ukrainians.

They tend to integrate quickly and easily, learning the language and adopting the local culture faster than most other nationalities. No surprise there, Ukraine and Poland share a long, tangled history – brothers from another mother, sisters from another mister, so to speak.

Lviv, affectionately referred to by Ukrainians as Little Paris (and by Poles as Lwów), was a Polish city for more than a few centuries. In 1658 it was even declared equal in prestige to Krakow by King Jan Kazimierz, thanks to its heroic stand against invading Swedish armies. No wonder then that Ukrainians, especially those from the country’s western regions, feel so at home here. That isn’t to say the two countries are entirely brethren without estrangement. The border between Ukraine and Poland, patrolled by border police and armed customs officers clad in military fatigues, remains one of the most heavily guarded of the EU, with queues in either direction taking several hours to pass. And recent political unrest throughout Ukraine presents another stark border between the Ukrainians and their Polish counterparts: that of geo-political alignment.

As the lulls of Christmas tunes float through Krakow’s main square, the squares of Ukraine reverberate with the chants of anti-government protestors. Sparked by Ukrainian President Viktor Yanukovych’s decision to suspend trade and visa agreements with the EU in favour of closer ties with Russia, mass demonstrations flared up across the country. Demonstrators, many of them students, have taken to the streets, from Kiev to Lviv, demanding an EU-oriented future for a Ukraine free of Russian influence.

Against this backdrop, the Krakow Post talked with Krakow-based Ukrainians Viktoria Gnatiuk, Daniil Snisar and Andrei Sidorenko about their lives here, about recent events back home and about their hopes for their
motherland.

Five years ago, Daniil Snisar arrived in Krakow from Slavutych, 50km from Chernobyl, to study journalism at the Jagiellonian University. The standards of Poland’s universities brought him here, he said: “The quality of education. The European Diploma of Higher Education – these were the main reasons.”

“I saw an advertisement that Ukrainian graduates could study in Poland, and I thought, ‘Why not?’” Daniil sees a warmth in the Poles that allows him to feel at home. “I went on a tour of Poland and visited many towns and universities. I found the Poles very friendly and hospitable to Ukrainians. A little later, I began learning Polish and decided to come here,” he said.

The protests back home initially filled him with ‘delight and pride.’ “Students took to the main squares of the country to defend their interests and fight for the future. It was fine,” he said. However, he has become more cynical. Exhibiting the wariness of someone who has already experienced one, failed pro-Western revolution, the demonstrations no longer fill him with hope or delight. He now sees the protesters as being manipulated by the opposition.

“Opposition politicians understand that the protests can be used to increase their popularity. But the opposition wasn’t with the people to the end. Opposition leaders magically ‘disappeared’ just an hour before the brutal police attack on the students.”

“The people are puppets in the hands of politicians,” he continues. “Ukraine will lose its independence if it joins the EU. Ukraine is a self-sufficient country with great potential. If we find a good leader, it will be easy to make Ukraine an independent, democratic and sovereign state.”

Andrei Sidorenko came to Krakow later in life. Originally from Kiev, he is an online media professional with a young family. Although he describes his emigration from Ukraine to Poland as ‘running away’ and a ‘plan B,’ he is seeking permanent residency here.

Comparing his new home to Ukraine, he says: “The environment is much calmer here. People value the privacy of others.” The schools, too, he finds: “Much calmer. Less stressful for the kids.” He also enjoys access to Western financial services, such as cheap home loans.

Andrei’s ‘plan B’ was not just for his own benefit, it was about a better future for his family. “I came here and spent a lot of money already, and I keep on spending,” he said, referring to the arduous and Byzantine immigration process. “I want my children to live in a democracy. I want them to have opportunities to study, travel and work where they choose to.”

With this in mind, Andrei expresses a deep sympathy with the protestors back home: “The people are fed up. The president stepped on the last hope they had for Ukraine to become a real democracy. This is not the first time the nation has called for rights. It is understood that people will not stop until they win,” he said, “The EU is the only way.”

Barring a complete transformation of Ukrainian government and society, Andrei sees himself staying in Poland. “I’m trying to get permanent residence in Poland. This is the aim.” And what does he miss about home? “I miss shashlyk made on an open fire, and red caviar – in Ukraine, it’s cheap. And the medical system. I’m not saying it’s awful here, but lots of stuff I can get fixed in no time in Ukraine take ages in Poland.”

Viktoria Gnatiuk arrived in Krakow from Donetsk in 2011 to study dentistry. Like Daniil, she was also attracted by the better educational standards. “The universities are better here,” she said, “In Ukraine they’re corrupt. Professors want bribes. And the knowledge is outdated. Knowledge from the days of the Soviet Union is still the standard there.”

Having a degree from an EU university will enhance her career prospects, she believes. With a Polish degree: “I can work anywhere in the world. I can go anywhere – Austria. Germany, maybe the US. If I studied in Ukraine, I wouldn’t be able to. The degrees are not recognised. The education isn’t as good. My mother opened a dentistry practice five years ago. She couldn’t find any good dentists from Ukrainian universities. They couldn’t even do basic things.”

Viktoria feels that she integrated well into Polish society. She learned the language shortly after arriving and quickly established a circle of Polish friends. “People here are more communicative, more open,” she said, “I can’t talk to strangers in a bar in Ukraine, but here I can. I feel good here.”

Recent events have given her a renewed affinity with her fellow Ukrainians. “We have solidarity. We stand together. I had thought about getting Polish citizenship, but now I know I only want to be Ukrainian. I must stand with my people,” she said. “The president doesn’t represent the people of Ukraine”, she continued, “He steals their money. He represents only himself. And Putin.”

Her position regarding Ukraine’s stance on the EU is closer to Daniil’s than Andrei’s: “I want an independent Ukraine,” she said, echoing Daniil’s visions of a non-aligned nation. “Neither EU nor Russia. If we join the EU, prices will rise, and I fear what Russia could do.”

In light of her rekindled love for her homeland, could she ever see herself returning? In true Eastern European fashion, she answered with a paradox: “I love my country, but I would only go back if there were major changes. And if those changes happened, it wouldn’t be the same country I was born in.”

One thought on “Ukrainian Voices in Krakow”