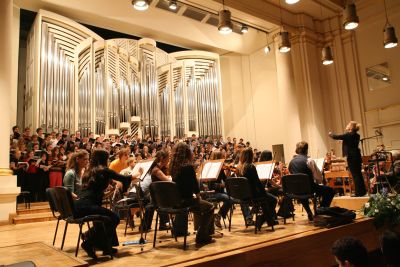 The Krakow Philharmonic and the Krakow Opera continue to struggle with leadership problems – and, in the case of the opera, a bribery scandal.

The effect? Critics of the two situations say some productions have been of poor quality and there has been a decline in music lovers’ interest, artistic stagnation and a tense atmosphere. Philharmonic management contend that is an exaggeration of what’s happening at their institution.

For almost two years the philharmonic has had no director. Those involved in the cultural life of Krakow say it’s hard to believe that the officials who approve the selection of a director ? some from Malopolski Province and some from the Ministry of Culture – have been unable to find a suitable person for a city so culturally and artistically rich.

“When such an institution doesn’t have an efficient manager, it doesn’t have a strategy and a long-term plan of artistic development at the same time,” contended Malgorzata Pawlowska, a graduate of the Academy of Music in Krakow who now does research there.

“Both musicians and spectators suffer from this stagnation,” she said, and “we should remember that it has also a negative effect on Krakow’s artistic image.”

Director Anna Oberc resigned two years ago. Wojciech Marchwica was chosen to replace her, but the orchestra’s unions refused to accept him.

The second competition this summer erupted in scandal. The winner was Adam Klocek, a young, but already renowned, cellist and conductor. The orchestra’s musicians liked the choice.

Klocek, who had managed the Kalisz Philharmonic, declared his intention to revive Krakow’s orchestra.

Then public institutions and news organizations received an anonymous letter that accused Klocek of falsifying parts of his resume, especially his “artistic achievements.”

Klocek denied wrongdoing, but his explanations didn’t satisfy the Ministry of Culture. His selection was invalidated.
The governor of Malopolskie Province is spearheading a search for another candidate. He or she will be chosen in an open competition before the end of the year, officials say. The deadline for applications is November 23.

The men who are running the philharmonic in the absence of a director, Jacek Berwaldt and Artistic Director and First Conductor Jan Krenz, say things are just fine at the orchestra.
“This problem is exaggerated,” Berwaldt said. “The institution is active and it is functioning well. Our concerts attract a wide public. And a new director will not perform any miracles at this institution.”

Some musicians see the problem in a different light. “I think the musicians of the Krakow Philharmonic simply deserve a good full-time manager – a manager who will be able to create a comfortable atmosphere and provide the artistic and financial security the musicians need,” said Malwina Lipiec, a harpist from Krakow now working as a soloist in the Wroclaw Philharmonic.

“A stable situation in the philharmonic is a basic condition of its smooth functioning,” Lipiec said. “And of course a new director should make a great effort to promote the orchestra in Poland and abroad, following the example of other musical institutions across Poland.”

Critics say lack of a director has prevented the philharmonic’s repertoire from being modernized. The longer that situation continues, the more frustrated the musicians get, insiders say.
The Krakow Opera has had the same leadership gap that the philharmonic has had, plus a corruption scandal to deal with.
Recently the national government’s Central Anti-Corruption Bureau accused the opera director of bribery in the building of a new opera house, the construction on which started in September 2004. He denies the allegation, saying his arrest was political.

Marek Nawara, the governor of Malopolskie Province, fired him September 25, but Nawara said he made the decision before the scandal surfaced. The main reason for the dismissal was the low artistic level of the opera’s performances and unskillful management, Nawara said. He appointed Boguslaw Nowak as the new director.

The architect who won the competition to build the new facility has pleaded guilty in the case. He was accused of taking a 1-mln-zloty bribe.

Prosecutors arrested the two on grounds that they took bribes to ensure that the construction contract went to the consortium of companies that offered the bribes. The consortium has been cooperating with the anti-corruption bureau since the bureau got wind of possible bribery.

Many hope the new director, Nowak, will be able to deal with what critics say is the institution’s declining reputation. There are many issues that must be addressed, both in terms of organization and art.

Nowak will also be responsible for overseeing the completion of the new opera house ? which is over budget and will not be finished by the end of this year, as scheduled.

Despite the delays, opera officials say they expect performances in the artistic season of 2008-09 to be in the new facility. Currently the performances are being held in the Slowacki Theater.