You live in an average Krakow apartment. It’s 50 or 60 square metres. Two rooms, maybe three if you’re lucky. You have a family, a wife and two children in their teens. You are obliged to watch television all evening, with no chance of a relaxing nap. Every night, you fold out your bed before going to sleep. Obviously, you don’t have much privacy. What you do have is a car – preferably an SUV, the bigger the better.

Alone in your car, you have your own space at last. You are the king of a four-wheeled kingdom. You can drive the way you want, switching lanes at the last moment, the way you’re never allowed to switch channels at home. You can make telephone calls without being listened to. You are Kubica. Lower mammals – cyclists and pedestrians – are the peasants. They should be on the pavements, never in the way of your royal progress. 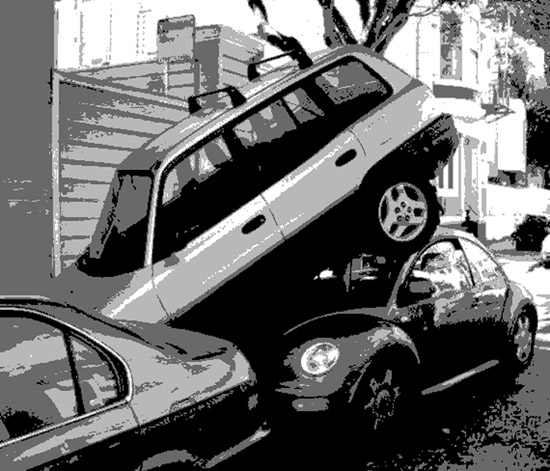 Unfortunately, your reign is not permanent. Every so often, you must get out of the car and go back to your home, to your dear family, or your slave labour. This means you have to park somewhere, preferably as close to your destination as possible. Because there is not much parking space in the city, you feel completely within your royal rights to steal it from the peasants – the pedestrians. To some extent, you can do it legally, at any of the many places where parking on the pavement is allowed. Politicians are also drivers – they understand your pain.

Even if you park illegally, on the corner of a street or over a pedestrian crossings, the city police are unlikely to bother to get out of their cars and give you a ticket or a wheel clamp. That’s too much like hard work, especially in this weather. So you can take the risk, and park your car wherever you want.

No need to leave room for disabled people, women with small children, or old people walking with sticks. No need to leave space for the cyclists who have been forced onto the pavements by your reign of reckless behaviour on the roads. Just park in front of that table of people sitting on a terrace. Don’t worry about damaging the pavements, your four-wheel drive will handle the resulting ruts and collapsed kerbs.

You can smoke in your own car, so why not just dump your ashtray into the gutter or onto the pavement, the ash will be soaked up by the patches of leaked oil. Who cares? Not you – you’re not concerned about public spaces, and neither is the local authority.

We all need to take responsibility for keeping public places in order, especially when the politicians seem to have more important things to do. I must admit I have adapted myself to the local driving culture, to some extent. Have you? Krakow is a dirty and heavily polluted ‘cultural’ city, but which culture?

4 thoughts on “Furious Fred: King of the Road”