Since Poland joined the European Union in 2004, Krakow’s Old Town has undergone some major changes. Good city planning has improved the infrastructure of the area, enabling and boosting tourism. Meanwhile, in Kazimierz, city planning is a mess.

Kazimierz is almost universally known as the ‘former Jewish District.’ Part of it certainly is, another part certainly not. A large part is Catholic, with huge churches, church and educational institutes, hospitals, and monasteries. 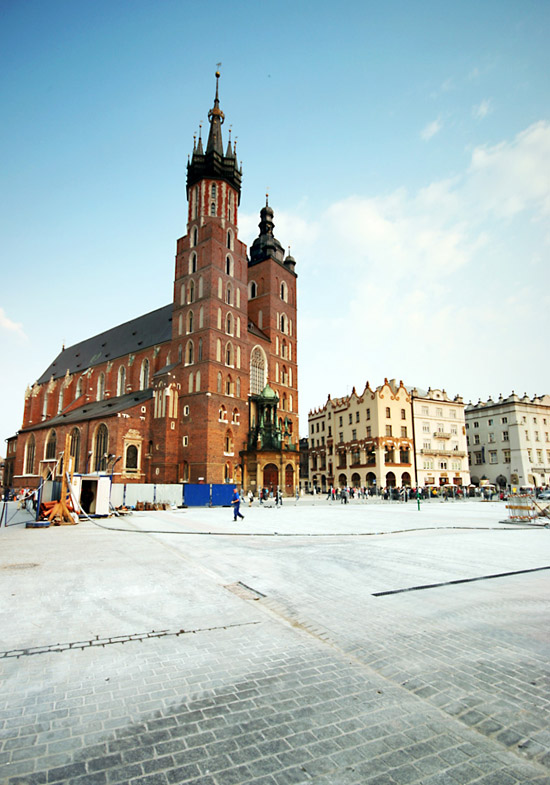 The ‘Jewish’ label is most visible around ul. Szeroka. Its former Jewish character was heavily emphasised after the release of Spielberg’s Schindler’s List in 1993, which gave Holocaust tourism in Krakow its first boost.

There are three centres to the ‘limited’ concept of Kazimierz: Plac Nowy, ul. Szeroka and Plac Wolnica.

Plac Nowy and its surrounding streets have become the nightlife centre, with almost all the buildings housing pubs, restaurants and fast food places. In about a decade, it has mutated from a sleepy neighbourhood with a multi-functional market into the lowest common denominator of budget-flight entertainment.

Ul. Szeroka, once the poor Jewish market place, has become more fancy with Jewish-themed restaurants and renovated synagogues. It does not have the vibrating nightlife of Plac Nowy. Plac Wolnica has the Ethnographic Museum in the old Kazimierz City Hall, and that’s about it. The place is largely dead, and nothing more can be said about it.

In all these changes to Kazimierz over the last ten years, there has been no trace of city planning. There was a plan to revamp Plac Nowy a few years ago. The design competition was won by Cracovian architects, but nobody doing business in the area liked it, and there was a whiff of nepotism.

Today, there is no sign of the plan coming to fruition. Instead, a huge and completely inappropriate hotel is being built, looming over the square. The road infrastructure is a mess and you easily break a leg on the pavements. The condition of the roads is worse then in Bucharest.

The streets are too narrow to allow cars to park on the sidewalks – an idiotic Polish idiosyncrasy. The cars parked on the cracked and rutted pavements of ul. Józefa, for example, leave no room for pedestrians to stroll past the small, and sometimes attractive, shops. These businesses are struggling. Who else will take the risk of opening a boutique here?

My plan? Give Kazimierz back to pedestrians by banning the cars. Public transport is sufficient, and taxis are reasonable. Repair the pavements and maybe allow cars to park on only one side of the road. Bring the Concerts On the Roof back to Plac Nowy. Take city planning out of the hands of Kazimierz district – they are incompetent – but beware of nepotism in procurement procedures.