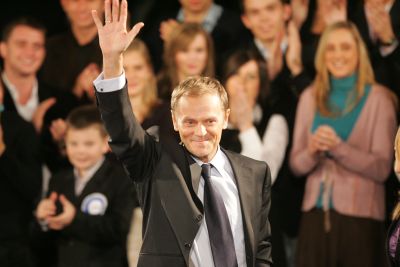 The Civic Platform Party’s Donald Tusk is working on putting together a ruling coalition after President Lech Kaczynski designated him prime minister on November 9.

The Tusk-led Civic Platform Party won the most seats in the snap election held in late October ? 209 of parliament’s 460 seats. Tusk hopes to put together a coalition of 240 parliamentarians by getting the Polish Peasant’s Party to work with him.

The prime minister is a 50-year-old former historian and soccer fan. He has had a lot of experience in politics, beginning as a political dissident in the Communist era. He has helped established three parties, including the Civic Platform Party, which he chairs.

Many Tusk admirers like the guts he showed in his election fight against former Prime Minister Jaroslaw Kaczynski’s Law and Justice Party, which appeared invincible during much of its two-year reign.

“It was a battle. But we won it!” Tusk said after the election results came in.

Tusk was born in 1957 in Gdansk in northern Poland. It’s fitting that another political giant killer, the Solidarity movement against the Communists, started in Gdansk, the hometown of Solidarity leader Lech Walesa.

Tusk’s family has lived in Gdansk for generations. During World War II the Nazis forced both of his parents into slave labor and put them in concentration camps.

Tusk got into politics in the late 1970s as a student of Gdansk University. In May 1977, after the Communist security service murdered student and dissident Stanislaw Pyjas, students at Gdansk and other universities founded the first Students’ Solidarity Committee in Eastern Europe.

Its main goals were to defend students’ rights and to struggle against communism. Donald Tusk was one of its most active members.

Tusk obtained a master’s degree in history in 1980 with a thesis on the World War I-era national hero and military leader Jozef Pilsudski.

That same year, inspired by workers’ strikes across the country, he helped found the Independent Movement of Polish Students. More important, he joined Solidarity.

His dissident activities led to the Communists firing him from the state-owned company where he worked. From 1984 to 1989 he had to work as a laborer.

After the fall of communism in 1989, Tusk became a rightwing liberal and keen advocate of a united Europe. He left Solidarity in 1991 to found a party called the Liberal Democratic Congress. It major tenets were a free-market economy, privatization of state-owned enterprises and Polish membership in the EU.

The Liberal Democratic Congress got 7.5 percent of the vote in the 1991 parliamentary elections. But two years later it fell below the 5 percent threshold needed for a party to have seats in parliament, a bitter disappointment for Tusk.
A year later, however, he helped engineer a merger of his party and the Democratic Union, which also had its roots in the Solidarity movement.

The merged party, the Freedom Union, got 13.4 percent of the vote in the 1997 elections. Tusk himself was elected to the upper house or Senate.

Four years later, in 2001, he helped found the pro-business Civic Platform Party, which won 13 percent of votes in that year’s election. From that moment on, Tusk became more and more influential in national politics.

In 2005 the party ran him as its candidate for president. Lech Kaczynski of the Law and Justice Party, the twin brother of Prime Minister Jaroslaw Kaczynski, defeated him in a runoff by a margin of 54 percent to 46 percent.

Law and Justice politician Jacek Kurski tried to discredit Tusk during the campaign by maintaining that Tusk’s grandfather fought as a volunteer for the Germans during World War II.
Tusk admitted that his grandfather, Jozef, was in the German army. But he contended that the Nazis forced him to join. He also pointed out that his father deserted the Germans 10 days later and joined the Polish Armed Forces in the West.

Some people believed the Law and Justice version of the story, however, hurting Tusk’s chances for president.

Tusk would get his political revenge in October of this year by leading the Civic Platform to its election victory over Law and Justice.

Ten days before the election, polls showed Prime Minister Jaroslaw Kaczynski and Tusk neck and neck. Then came a turning point ? a national television debate between the two.
Political pundits had thought that Kaczynski, a blunt-talking populist, would vanquish the courteous Tusk. Instead, it was Tusk who routed his opponent calmly and systematically.
He came across as tough and decisive. The polls shifted to give the Civic Platform a 10-point lead heading into the election.
Tusk has said that as prime minister he would like to improve strained ties with Russia and Germany while maintaining strong ties with the United States.

His political ideas combine strong social conservatism and support of a free-market economy without government interference. He also has pledged to withdraw Poland’s 900 troops from Iraq.

Tusk and his wife Malgorzata have two children, 23-year-old Michal, a journalist at Gazeta Wyborcza, and 16-year-old Katarzyna, who gained fame in her own right by taking part in the popular television show “Dancing with Stars.”

Tusk is a jazz lover and head of an amateur soccer team. He was co-author and co-publisher of a series of popular tour guides about his native town, Gdansk. A few years ago he began learning Kashubian, the language of his Slavic ancestors in north-central Poland.