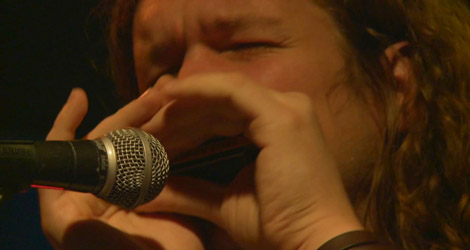 A new breed of entertainment bounded onto the Krakow scene in November with the first edition of Talking Dog International, and quickly won the hearts of the audience with its adorable antics.

Talking Dog International is a refashioning of long-running cultural event, Gadający Pies. Now entering its third year, Gadający Pies is the brainchild of the owners of legendary Krakow nightspot, Piękny Pies. It has been variously described as an anthropological experiment and a grassroots rebirth of the tradition of Krakow cabaret.

Earlier this year, a late-night conversation in Gadający Pies gave David McGirr the idea to create an English-language version of the event, and so Talking Dog International was born.

In essence, performers are invited to take to the stage for just five minutes, where they can sing a song, make a speech, read a poem, do a trick or, in some way, entertain, delight or inform the audience.

Talking Dog International takes this tried and tested formula and throws it open to the city’s international community. All spoken-word performances are in English, but the 17 acts who graced the stage on November 21 included performers from Portugal, UK, Hungary, Canada, Holland and lots and lots from right here in Poland.

Held in the back room of Piękny Pies on ul. Bożego Ciała, the first show had it’s share of highs. With her first appearance on a stage anywhere, Portuguese fado singer Sofia Esteves (ably accompanied by Kamil Nowakowski) blew the audience away with a performance worthy of an X Factor favourite. Later in the evening, Hungarian folk singer, Martina Szerencsés, held the audience spellbound with a beautiful rendition of a traditional song.

Co-hosted on the evening by David McGirr and Kevin Cullen, the bill included Richard Lucas shedding light on the story of one of Poland’s little-known heroes, Wojtek the Soldier Bear. A representative from Krakowski Alarm Smogowy roused righteous ire over the state of our air, and US academic Erica Lehrer read from her book about the contradictory world of Jewish figurines. Musical acts included members of the Silver Owls with a rip-snorting rendition of some pop classics, and rising star on the Krakow scene, Karl Culley, glued everyone to their seats for the after-show gig with his mesmeric blend of blistering, acoustic guitar skills and enigmatic lyrics.

Łukasz Wiśniewski and Tomek Kruk with some Slavic blues

The next edition of Talking Dog International will take place on January 9. Find out more at: www.facebook.com/talkingdoginternational, or email talkingdog@krakowpost.com.

The unique Karl Culley rounds out the evening