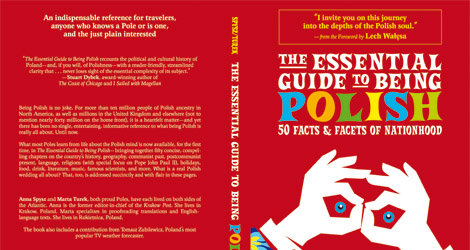 They tell me it’s not easy being Polish. I have to admit, from my comfortable armchair of smug Englishness, it does look exhausting. Chief among the difficulties seems to be the deep conviction that being Polish means something profound, coupled with a vexing degree of uncertainty as to exactly what that is. It is this existential gulf that The Essential Guide to Being Polish attempts to bridge.

Any initial confusion as to why a guide to being Polish should be published in English is swiftly dispelled by the preface, which introduces the volume as: “a guidebook for the lapsed Pole, non-Pole living in Poland or anyone remotely interested in… the essence of Polishness.” We should not forget, Polishness is a condition not curbed by geography.

Co-written by Anna Spysz, the former editor of the Krakow Post, and Marta Turek, a person of no less significance I’m sure, the Guide contains 50 chapters with such tantalising titles as How to Survive a Polish Wedding, Exile and Emigration and (no peeking at the ending) The Essence of Polishness.

Anna, for the few reading this who don’t know her, was born in Poland but grew up in the States before returning triumphantly to her homeland several years ago. Marta too has lived on the other side of the pond, and it is this perspective that informs the book’s approach.

Brought to market by US publisher New Europe Books, the target audience is clearly the ill-defined millions who make up the Polish diaspora. More than most, they are inculcated with a powerful folk memory of ‘the old country’ but often lack detailed, up-to-date knowledge of modern Poland and how it came to be the place it is.

As a non-Pole, I wasn’t confident that this guide would have much to teach me. Fortunately, it turns out that people who think they are Polish and people who are comfortably convinced they are not can benefit from the same information.

There are really two threads to this guide. The first is a carefully researched but highly reader-friendly peregrination through the story of Poland – a thrilling if sometimes depressing ride you wouldn’t believe if you read it in a novel. The second is an attempt to pin down those aspects of modern Poland that make it unique – its national obsessions and habits.

Into the latter category fall such things as food, hospitality, a paradoxical relationship with alcohol, revolutions and uprisings, the Polish language, and the strange preoccupation with Górale – all subjects that are unavoidable for anyone who spends more than twenty minutes in the company of Poles.

The dual-authorship generally works well, with each concentrating on what they know best, but there are moments of striking discord – the chapter Drinking in Poland, for example, takes the stance that the stereotype of the Polish heavy drinker is a myth, but the chapter titled Polish Men suggests that the male of the species “are expected to be able to drink their weight in beer or vodka, which… has enabled large-scale alcoholism in the country.” There are other examples, but they are small hiccups in an otherwise worthwhile book.

Overall, I can say honestly and without the intervention of plain buff envelopes that The Essential Guide to Being Polish will not disappoint. It is not a book for the serious scholar of Polish history and culture, but the sheer range of topics covered, the amiable style and the genuine interest of the authors mean that there really is something for anyone even remotely interested in this lovable old rogue of a nation.

You can find out more about the book, and buy it, on Amazon.com

The Essential Guide to Being Polish official launch event, including a Q&A with one of the authors, will take place at 7pm, December 7, at Massolit Books & Cafe.

One thought on “Review: The Essential Guide to Being Polish”