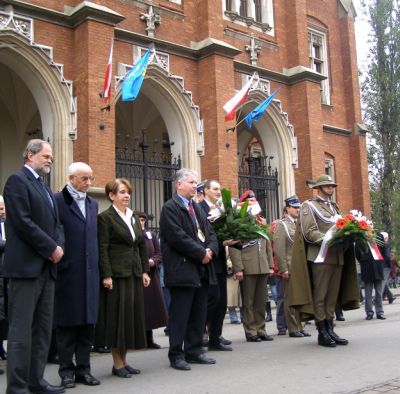 Since 1999, Nov. 6 has been commemorated as University Remembrance Day to honour the Polish professors and academics who were taken to concentration camps by the German Nazis in 1939, and also to honour all deceased members of the academic community.

On Nov. 6, 1939, 144 academics from Jagiellonian University, 21 from Technology University (AGH) and three from Economic University (UE) were lured to room 56 of Collegium Novum (Latin for “New College”) for an alleged lecture by Senior Storm Unit Leader SS Brunon Muller, as part of the Operation Sonderaktion Krakau.

The Nazi officer said the academics were under arrest for starting the school year without permission and for their “hostile attitude towards German science.”

The professors were sent to Sachsenhausen concentration camp.
After international protests, including one from Italian Fascist dictator Benito Mussolini, 101 academics over the age of 40 were granted releases in February the following year. But many of them were dead already, and others died soon after they were freed.

This year’s Remembrance Day ceremonies started with a Mass in St. Anne’s Academic Church in Krakow and the placing of flowers on the graves of the professors and at memorial plaques at Jagiellonian and at the Oak of Freedom, which grows in front of the Collegium Novum (at the corner of ul. Golebia and Planty).
The main events took place in room 56. Participants included, among others, families of victims of Sonderaktion. The climax of the ceremonies was the reading aloud of the names of 182 deceased academics, done by the last detention survivor Jozef Wolski.

During the ceremonies, the Stanislaw Kutrzeba prize was awarded to PhD student Patrycja Pogodzinska, who wrote her doctoral thesis on discrimination against homosexual and transsexual people in the light of international law.

This prize is granted every year to an outstanding academic or student at Jagiellonian University, and allows the winner to spend a year of research in Heidelberg and a weekly practice in the European Tribunal of Human Rights in Strasbourg, France.
The man for whom the prize was named, Stanislaw Kutrzeba, was an outstanding professor of Polish law, and one of those imprisoned during Sonderaktion Krakau.

“Heidelberg University and the Max Planck Heidelberg Institute for Comparative and International Law want to honor with this prize the events of Nov. 6, 1939.” said Bernhard Eithel, the vice chancellor of Heidelberg University. “I want to assure that we members of academic community of Heidelberg keep in mind those dramatic events. This prize should therefore become a symbolical sign of warning and a basis for constant reminding about November 6. 1939, because it expresses our mutual hope for future peace, reunion and friendship.”

One thought on “Anniversary of “Operation Sonderaktion Krakau””