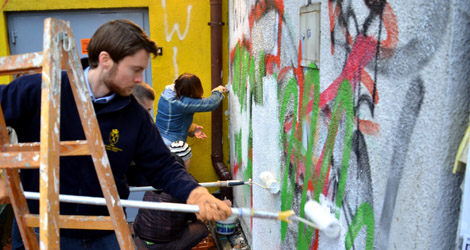 You don’t have to go far in Krakow to find walls vandalised with graffiti in very public places. Now, the residents of one city district are taking direct action to tackle this menace.

One new neighbour in the area, Christopher Bloswick, wrote to the Krakow Post about how and why he became involved in the cleanup effort. These are his words:

No area is spared from the atmosphere of decay and disorder surrounding the perpetual spray paint war between rival football gangs, or the mindless tagging of walls by any number of serial graffiti offenders who work rather like a certain domestic pet marking its territory.

It seems the residents of Krakow have had enough of this disgusting habit, which often includes vulgar images or racist slogans. In the Kliny neighbourhood, a group of locals is trying to rouse the community to take action.

Residents organised their first cleanup operation on November 13, comprised of local volunteers, students from AGH University and Cafe Obywatelska. Under the coordination of local councilman, Waldemar Domański, they offered to paint over the vulgar imagery sprayed on the walls of local shops, using donated paint, brushes, and rollers. 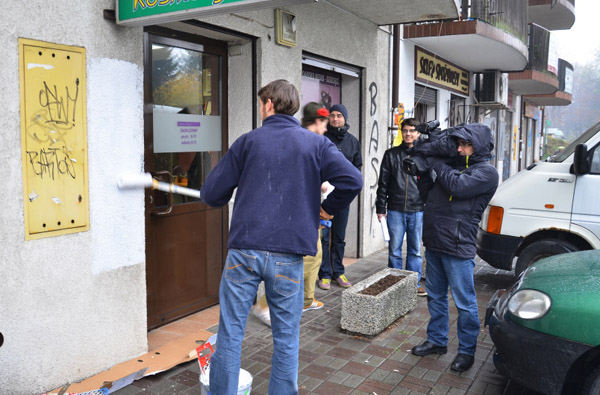 So many people have a bit of leftover paint kicking around in their garages and basements, the organisers thought. So why not ask for donations to help deal with this community problem? And that’s the key, getting people to understand that, even though the vandals may have hit someone’s private business or somebody else’s apartment building, this is a problem that affects us all.

The only way to deal with it is to come together as a community and take action. That’s why Mr. Domański wants to bring this message to the pulpits of the churches and to the classrooms of area schools.

In all likelihood, a lot of the graffiti comes from local youths, so it’s important to educate them and their parents that this isn’t just harmless juvenile misbehaviour. It costs money to clean up, leaves locals feeling violated, sends a bad message to children, and ends in neighbourhoods looking like rundown slums.

Hopefully, these first couple of hours the volunteers spent painting over the graffiti in Kliny has sent the message that, if you’ve been regularly targeted or simply randomly impacted by roaming vandals, you don’t stand alone. Perhaps others in Krakow will follow this example.

Find out more about the Kliny cleanup on their community website.

One thought on “Cracovians Pull Together to Counter Graffiti”