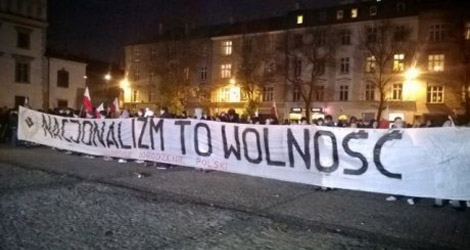 At a rally under the walls of Wawel Castle, PiS leader, Jarosław Kaczyński, called for the creation of a “truly independent Poland” and praised the policies of Prime Minister of Hungary, Viktor Orbán – a sentiment warmly welcomed by the several hundred Orbán supporters invited from Hungary for the event.

Police estimated that approximately 1,500 people took part in the NOP march, although the organisers claimed 10,000 were there.

One unquestioned attendee was Nick Griffin, chairman of the British National Party (BNP) and Member of the European Parliament (MEP) for North West England.

The BNP espouses: “voluntary resettlement whereby immigrants and their descendants are afforded the opportunity to return to their lands of ethnic origin” and has frequently campaigned against uncontrolled immigration to the UK from Poland.

Delivering a speech on pl. Matejki, Griffin said: “Poles who go to England see that it is dominated by immigrants. It’s the same in France and Germany. This is a deliberate attempt to control Europe. Powerful Zionists want to destroy us. We, the nationalists, must stand together to fight for a white, nationalist and radical Europe.”

133 thoughts on “BNP’s Nick Griffin Marches With Polish Nationalists and Warns: “Zionists Want to Destroy Us””