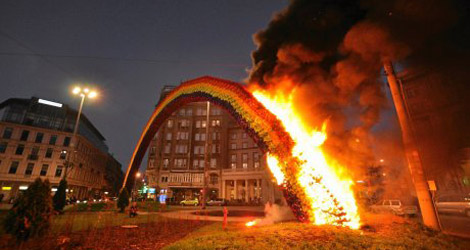 Bricks and rubber bullets flew and vehicles burned on the streets of Warsaw as Poland’s Independence Day celebrations were disrupted by violent clashes for the third year in a row.

The Russian embassy in the city was pelted with stones and firecrackers, a squat occupied by ‘anarchists’ was attacked and the iconic rainbow art installation on Plac Zbawiciela was burned.

As in previous years, the trouble centred on one of the traditional afternoon marches held by political organisations and other groups in the capital every November 11.

At 16:42, Warsaw city authorities withdrew permission for the march to continue, at the request of the police, citing disruptions to law and order and the endangerment of members of the public and law-enforcement officers.

Despite this order, many marchers continued on the planned route along ul. Marszałkowska, quickly meeting a barricade of over 1,000 riot police.

As of 21:00 on Monday, November 11, local media in Warsaw have reported 39 people arrested for public disorder offences and seven police officers injured.