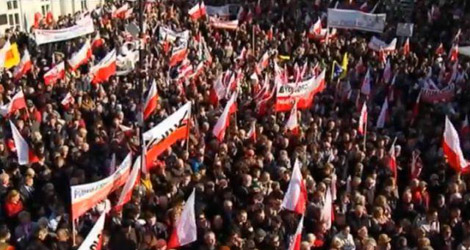 Poland’s right-wing opposition party, Law and Justice (PiS), have decided to stay away from Polish Independence Day celebrations in Warsaw on November 11, and will be marching in Krakow instead.

Last year’s Independence Day celebrations in the capital were marred by serious street violence that left at least 40 police officers injured and dozens of citizens hospitalised.

The violence broke out after self-proclaimed ‘anti-fascism’ activists attempted to block the route of traditional Independence Day marches in the city.

Speaking about the decision to relocate the party’s celebrations to Krakow, a PiS spokesperson said: “We don’t want to have anything to do with riots. Let the football hooligans and leftists chase each other around in Warsaw.”

This year, other prominent members of PiS and supporters of the party will join Kaczyński in Krakow to march from Wawel Castle to pl. Matejki. Members of Gazeta Polska clubs – social organisations centred around conservative weekly, Gazeta Polska – will also join the march.

Listed as an anti-Semitic organisation by the US State Department and the European Commission against Racism and Intolerance, NOP has courted publicity in the past with provocative slogans. At an LGBT rights supporters’ meeting in Toruń in 2006, NOP activists chanted “”gas the queers.”

Among the 210 people arrested during last year’s Independence Day riots in Warsaw were 92 German citizens, a Spaniard, a Hungarian and a Dane.

Perhaps coincidentally, Poland’s Ministry of Internal Affairs has announced that Schengen rules will be suspended for the period November 8–23 in an attempt to prevent disruption to the Warsaw Climate Change Conference, which begins on November 11.