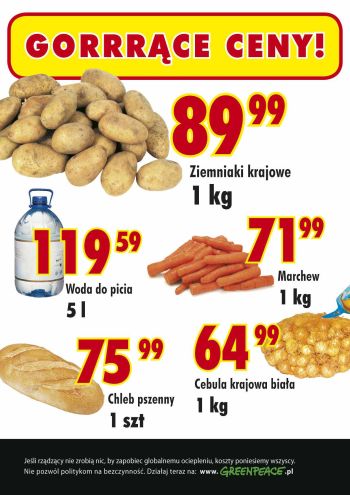 Some interesting billboards have been attracting the attention of the citizens of Warsaw. The advertisements encourage residents of the capital city to buy the most popular commodities – potatoes, bread and water. But one thing is unusual – extremely high prices.

The posters on the billboards advertise the potatoes for 89.99 złoty per kilogram, a loaf of bread for 75 złoty and a 5-litre bottle of water for 100 złoty.

Normally, the price of each of them amounts to 3 to 5 złoty. Each poster is accompanied with the words “Hot prices!” The advertisements are similar to campaigns run by supermarkets.

This controversial campaign is the latest idea of the Greenpeace organization. Its aim is to draw attention at the problem of climate change, with high food prices being a prime example.
For Greenpeace, focusing on efforts to stop global warming and climate change is a priority issue.

According to the organization’s scientists, disruptions to ecosystems may harm everything and have negative long-term effects, such as hundreds of species extinct, problems with basic commodities and also high prices.

Greenpeace says climate change could bring devastation to people and communities, especially in the poorest countries.

One of the most dangerous and common effects of global warming might be a reduction of crops of basic vegetables and a water deficit. The ad campaign in Poland is connected with this effect of climate change.

It is also possible to sign a Greenpeace petition addressed to the Polish government on the web site: www.greenpeace.org/poland.