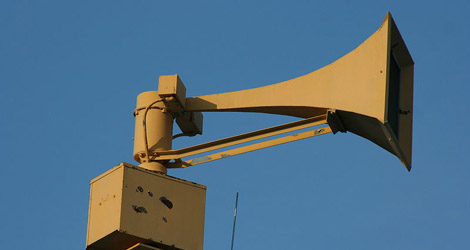 Cracovians were alarmed to hear warning sirens across the city this morning, but it was only an exercise.

Between 10:00 and 10:15, civil defence alarms were tested across the entire country as part of a terrorism-response exercise called Renegade-Kaper 13/II.

At about 11am, sirens sounded the ‘all-clear’ signal – a continuous tone.

The sirens are tested twice every year, but not usually countrywide at the same time. An all-clear signal is sounded to commemorate the September 1, 1939, Nazi invasion of Poland every year.

Renegade-Kaper 13/II is intended to test the ability of Poland’s armed and emergency services to respond to a terrorist attack, and is being held in advance of the Warsaw Climate Change Conference, November 11-22.

The ‘script’ for the exercise envisages the seizure of a civilian airliner at Warsaw’s Okecie airport, and the use of fighter jets to force it to land at another, unnamed, ‘intervention’ site.

The alarm test was announced in local, Polish media yesterday, but many non-Polish speaking residents and visitors to the city were unaware that it was due to take place.

One thought on “Krakow Alarmed by ‘Air Raid’ Sirens”