Now that autumn is upon us, we reflect on the seasons past. A winter that lasted overly long, oftentimes flattering to deceive, followed by three days of spring and a summer whose lease had all too short a term.

In each of the previous ten summers, there had been compelling reasons not to attend ‘Europe’s largest free festival.’ To our friends from across the pond, and others equally ignorant, Woodstock conjures images of flower- (read: weed) powered, scantily-clad (or birthday suited) dancing hippies, extolling the virtues of free love in theory and practice. Witness the bare breasted image on the front page of red top Super Express on the Saturday of the fest accompanied by the headline: “This is what your child is doing at Woodstock!” 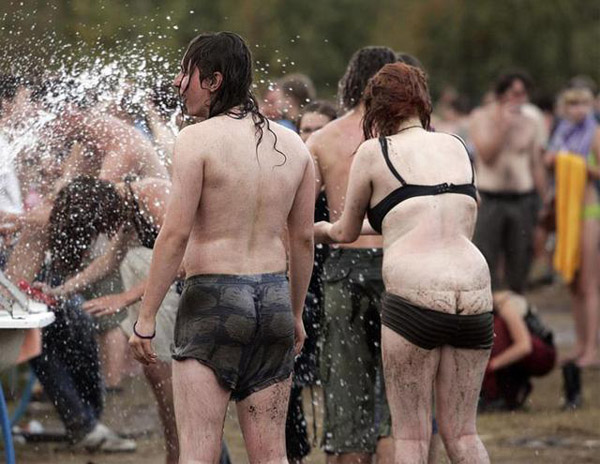 Woodstock is the wild child of Jerzy Owsiak (Georgie Porridge), also founder of The Great Orchestra of Christmas Charity (Wielka Orkiestra Świątecznej Pomocy/WOSP ). WOSP holds this ‘gala’ event in July/August, though they do their main, one-day nationwide fund raising event in December, generating cash for equipment in children’s hospitals. They are now also going to focus their efforts on care for our senior citizens. Fair play.

It’s a commonplace in this country that private security operatives are baton-wielding, gun-toting dresarzy prancing about like orangutans, though lacking the basic intelligence and common sense of those magnificent creatures. Happily, security at this Woodstock was of a higher standard. These goons were able to understand not only English, but Polish as well. Very politely, they informed us we couldn’t carry our processed hops into the field. Later, the sinister sounding ‘peace patrol’ visited us in our enclosure. Their gripe was the multiplicity of glass Slovak empties secreted under Dutch’s car. The rebuke was delivered good-naturedly as they knew they had no power to enforce it. Memory is hazy as to who had the bar concession. C***sberg? Probably. The lack of stand pipes for drinking water was disappointing. Disclaiming: ‘This is Poland,’ doesn’t really cut it.

Talking of disappointments, did you see the front cover of the Krakow Post in July? It was silly season of course, but nevertheless a serious droop in standards from this organ. Don’t they know that the CEO of Ryanair, Michael O’Leary is a gobshite who will do anything for free publicity? Blue-sky thinking can emerge in two ways: either off the top of his head or through the back of it.

Witness his past rants on the injustices done to his company, and original ideas such as charging a pound to spend a penny or saving space by having standing passengers, each secured with a strap-on. (Even if not adopted by no-frills operators, British Airways can always stick it to their business class).

These ravings are always timed to coincide with the height of the tourist season. National broadcasters, who should know better, are conned into reporting this rubbish by showing shots of Ryanair’s tail livery before cutting to the gobshite.

If a newspaper with gravitas is going to engage with this type of bull, at least get something in return for it. Like a full-page advert. If you’re trying to present a wholesome image of someone Irish in our fair city, why not at least choose a paddy with a Krakow connection – like Colin Farrell.

Kicking off the new football season, from across Błonia Park we welcome Cracovia back to the Ekstraklasa. Like an annoying younger sibling, we didn’t miss you the year you were away. Well done on your derby draw at home on the eve of the equinox; it must feel like a victory. When did that last happen?