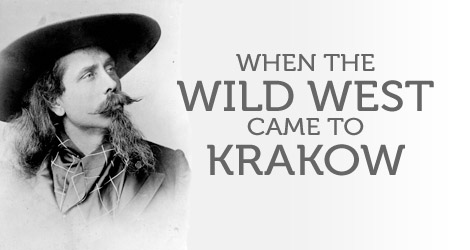 It’s no accident that the name Buffalo Bill conjures images of six-gun shootouts and Native American raids – William Frederick Cody, the man behind the name, practically invented the image of the Wild West through his massively popular touring show, Buffalo Bill’s Wild West.

What is less likely to come to mind is the image of rough riders and ten-gallon hats against the backdrop of Krakow’s Renaissance spires, but that’s exactly what happened in 1906 when the Wild West show rolled into town and set up shop on Błonia.

Cody got into the theatrical touring game in 1872, shortly after receiving a Medal of Honour for outstanding gallantry while serving as a civilian scout for the 3rd Cavalry Regiment. In 1883, he started Buffalo Bill’s Wild West show and began touring the United States, to widespread acclaim. The show also toured Europe eight times, making Buffalo Bill an international celebrity, with the last and most ambitious tour taking in 155 locations across Europe in 1906.

The eighty-first stop on the tour, on August 4, 1906, was at a rundown and faded town on the edge of the Austro-Hungarian Empire – Krakow. 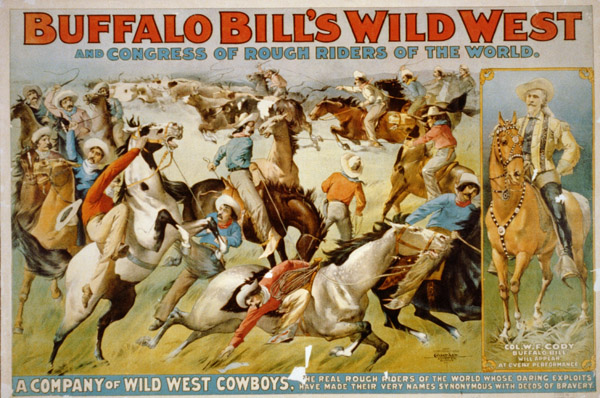 As it had elsewhere in the Old World, the show created a sensation. Local Krakow newspaper, Czas, devoted columns to a description of curious Cracovians waiting at the main train station at 4am to see the spectacle arrive. By 6:30am, the Czas reporter noted, the streets around the station were: “as crowded as the Market Square at noon.” Buffalo Bill and his entourage arrived in three trains with a total of 59 wagons, each stuffed with performers, animals and equipment.

The troupe entered the city in a grand parade, eliciting raised eyebrows from the locals, according to Czas. When the Native Americans and Asians appeared, there was a “murmur of indignation at their ugliness” and their complexion “evoked disbelief among old wives and their husbands with regard to their authenticity.”

Arriving on Błonia, well-practiced roadies set up a tent city and the cooks were ready to serve breakfast for 500 within 20 minutes as thousands of locals looked on. Czas records that much was made of the fact that the Native Americans did not swear while working, a practice it described as: “common and effective practice in the Galicia region.”

By one in the afternoon, spectators had to squeeze through stalls selling pretzels, fruit and pastries to reach the ticket office wagons. The cheapest admission tickets cost two krone – the Austro-Hungarian currency in use at the time (for comparison, a kilo of soap cost 7 krone and a pair of shoes 30 krone). The only ticket pre-seller in Krakow was a bookstore at Rynek Główny 14.

The show, which by 1906 time gloried in the name Buffalo Bill’s Wild West and Congress of Rough Riders of the World, was a well-oiled entertainment machine. The biggest crowd-pleasers were the mounted charges and parades performed by Native Americans, actors in US military uniforms, and Turks, Gauchos, Arabs, Mongols and Georgians decked out in colourful, traditional costumes.

Other highlights included re-enactments of battle scenes and stagecoach robberies and displays of sharp shooting and other skills. Sitting Bull, the legendary Sioux leader who defeated ‘General’ (actually Lt. Colonel) George Custer at the Battle of the Little Big Horn toured with Buffalo Bill for years, but he was dead by the time the show came to Krakow. Other famed performers included Calamity Jane and sharp shooter Annie Oakley, who was said to be able to split a playing card, edge-on, using a .22 calibre rifle and put several more holes in it before it touched the ground, though it is not certain that she was in the Krakow show.

The big finale was a reconstruction of the Battle of the Little Big Horn. Czas quoted one young spectator as exclaiming: “He must have stung those redskins” as the 60-year-old colonel galloped past, shooting at his targets.

After the show, the Czas reporter caught a tram back into town with Japanese, African American and Native American performers, still in their outlandish costumes, and a crowd of fascinated Cracovians.

“Some recognized the chiefs from the battle and were listening to their conversation. Arguments even arose as to the language that these last relics of the prairie heroes were speaking. And futile arguments they were indeed, as there were apparently no experts on the English language on the tram. Some claimed that Lonely Bear said the word ‘beefsteak’ among other things… Many however, agreed that Fiery Tale replied to his companion with the word ‘Pilsner.’” 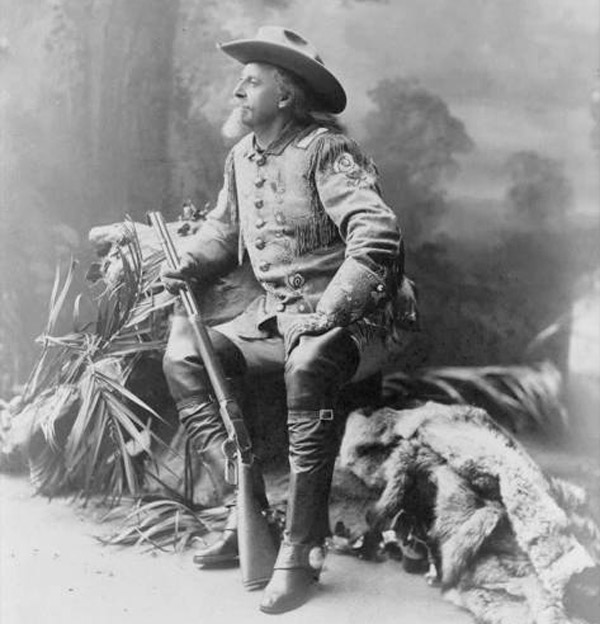 The Wild West and Congress of Rough Riders stayed in Krakow for the weekend, and even managed to fit in an impromptu football match with members of the embryonic Cracovia team – an event officially recorded in the annals of football as Poland’s first international fixture. The Krakow team won 1:0, though witnesses admitted that the American players were more skilled.

There are plenty of souvenirs of the 1906 tour in the storerooms of the Buffalo Bill Historical Center in Wyoming, but nothing from Krakow. The only known photo of the event is a snap of one of the ticket offices. Charles Eldridge Griffin, an employee of the show, wrote a memoir of the European tour, but Krakow is only mentioned as among other border towns “full of lawlessness and agitators.”

The unlikely relationship between Poland’s royal city and this icon of American flamboyance might have ended there, but there was to be one more encounter. In 1935, eighteen years after Cody’s death, the US ambassador to Poland, John Cudahy, came to Krakow for the inauguration of the Piłsudski Mound (Kopiec Piłsudskiego), and brought with him some soil from the great buffalo hunter’s grave. This was added to the growing monument, mixing with earth brought from all the battlefields on which Polish forces had fought. The events of 107 years ago are barely remembered in Krakow today, but in a way, a little bit of Buffalo Bill remains with us to the present.

Piłsudski Mound in 1938, shortly after its completion