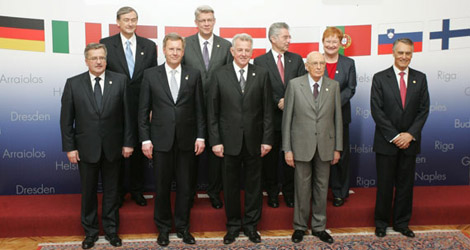 The presidents of nine European nations arrived in Krakow today for the ninth meeting of the Arraiolos Group.

The heads of state of Poland, Germany, Italy, Portugal, Austria, Finland, Slovenia, Hungary and Latvia will discuss, among other things, the current European economic and financial crises as well as Transatlantic and Eastern partnerships.

After a full day of talks around the theme of ‘escaping the European crisis.’ The nine presidents, who share the characteristic of having no executive power in their respective nations, attended a concert at St. Mary’s Basilica on  Rynek Głowny.

The second day of the conference will concentrate on partnerships between the EU and countries on the Union’s eastern borders, and will also be attended by the presidents of Bulgaria and Estonia.

The Arraiolos Group was founded in 2003, in the Portuguese town of Arraiolos in the southern region of Alentejo.