Many Polish linguistic purists will shrug in confusion at the name, but the city of Krakow now has an ‘oficer rowerowy’ (cycling officer), in fact, two of them. The phrase bears unequivocal military overtones and sounds a bit odd, but no one has yet come forward with a better name for the position of a municipality clerk for overseeing cycling policy.

Krakow was the first city in Poland to have cycling infrastructure bylaws (in 2004, one year before a similar document was adopted in London), but they have never been properly implemented. Many new cycle tracks are of poor quality and cyclists continue to complain loudly. This led many cycling activists to believe that there was a need for an official who would oversee cycling matters. Others argued that a cycling officer would be of little help, since he (or she) would not have the powers to enforce the bylaws. In fact, there are now a dozen cities in Poland with similar posts, but only two or three can honestly claim that their cycling policy is working.

Poland’s first oficer rowerowy was employed in Wrocław – a city known for its progressive cycling strategies and strong cycling community, as well as its poor, if abundant, infrastructure. Daniel Chojnacki, who has held the post since 2007 (he previously did the same job in Cork, Ireland), said that, without a strong focus on cycling issues from the city council and the cycling officer, it would not be possible to implement many innovative projects and ideas. Wrocław is now well known for its advanced stop lines for cyclists, Poland’s first large-scale cycle parking programme (there is one bike parking space for every 190 people, almost five times more than in Krakow) and its automated counters for measuring bike traffic.

I asked Marcin Wójcik, Krakow’s newly employed cycling officer and a long time cycling activist in Krakow, whether he is nervous about his new job. “I am afraid of mad drivers, but I love new challenges,” he said. “I never thought I would ever be a city employee. I have attended many meetings as a cycling activist, but now I believe I will have much more influence.” 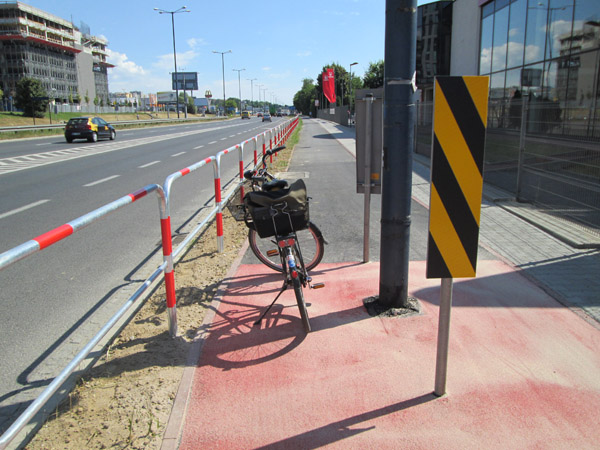 There is definitely much to be done, although Wójcik warns that the main danger may be unrealistic expectations, both on his part and among the cycling community. There is, however, the chance for huge growth in bike traffic. The evidence from the streets of Krakow is only anecdotal, but Wrocław has witnessed more than 200 percent growth – from 260 cyclists a day at some junctions in 2006 to more than 600 this year. Today, 3.56 percent of all trips in Wrocław are made by bicycle. The last traffic count in Krakow is seriously outdated, and shows cycling making up a mere 1 percent of trips some ten years ago.

Gdańsk is the other Polish city famous for its cycling-friendly policies. More than a decade ago, cyclists persuaded the municipality to implement a cycling infrastructure project, funded by the Global Environment Facility (an opportunity infamously missed by Krakow, where an official invitation letter was lost and the municipality did not bid). Now, Gdańsk runs an EU funded investment project worth 80 million złoty, and their cycling officer accompanies the mayor to many public events – recently the huge VeloCity conference in Vienna attended by 1,400 cycling activists, engineers, politicians and the EU commissioner for transport himself, Mr Siim Kallas.

Such a level of enthusiasm can hardly be imagined in Krakow. Marcin Wójcik cautiously predicts that, by the end of this year, contraflow bicycle traffic may be allowed on more downtown streets. He would like to see the one-way lanes along Aleje Trzech Wieszczów opened first.

Meanwhile, back in the real world, the municipality has decided that a huge lamp post in the middle of newly-built cycle track on ul. Bora Komorowskiego should stay where it is. The lamp post has even been made welcome, with special warning markings and a widening of the track to allow cyclist to pass on both sides, but the track itself is bounded by a massive barrier that leaves little room for manoeuvre and threatens to send cyclists crashing into either the post, the barrier or each other.

While this has enraged local cyclists, a more serious issue went unnoticed. The municipality has just turned down a proposal by the Kraków Miastem Rowerów (Krakow the Cycling City) advocacy group to plan for a crucial cycle track under the newly designed railway bridge in the Podgórze district.

So where is the cycling officer? Stand easy, things may change… or stay exactly the same – this is Krakow after all.