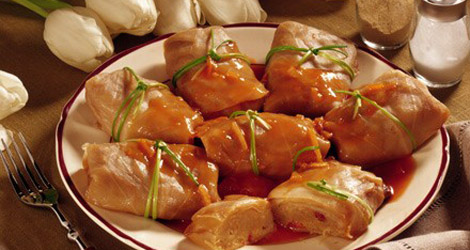 Krakow has the best restaurants in Europe, according to people who rate them on social media sites such as Yelp and TripAdvisor.

Dutch and Belgian travel website, StedenTripper.com, analysed over three million restaurant reviews in 160 cities for the study, and Krakow’s restaurants came out on top.

Krakow had the largest proportion of restaurants with average reviews of 8.5 out of 10, followed by  Zagreb, Istanbul, Oporto and Riga.

On the downside, although Krakow restaurants had good reviews, London, Paris and Rome had a much larger number of restaurants with ‘very good’ reviews – perhaps unsurprising given their relative sizes.

On a measure of quality-to-price, Krakow also wins the gold, followed by Warsaw, Prague, Cologne and Budapest. Moscow, Stockholm, Oslo, London and Venice were found to be the worst for forcing visitors to dig deep for a good dinner.

Least appetising in Europe were Toulouse, Malmo and Milan, with only 30 percent of the latter’s bistros receiving a score of 8 or higher.

For vegetarians, London, Vienna and Barcelona are the best bets for a good feed. Madrid wins for fusion cuisine and Istanbul and Glasgow net the medal for variety of fish dishes.

The study only included cities with at least 25 restaurant reviews on both TripAdvisor and Yelp.