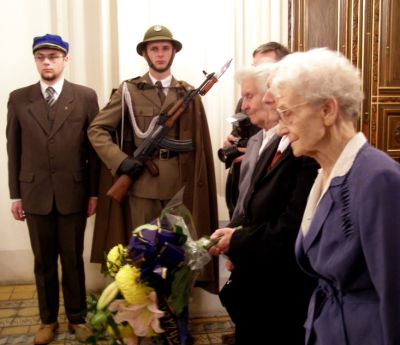 It’s been 89 years since Krakow became the first city in Poland to regain its freedom after 72 years of Austrian occupation. In October of 1918, Krakow was a part of the Galicja region that belonged to the multinational Austro-Hungarian Empire.

At that time, however, the empire was on the verge of collapse because of losses suffered in World War I, and the empire’s nations were preparing for separation and the establishment of their own governments.

On Oct. 31, a 29-year-old lieutenant, Antoni Stawarz, decided to attack an Austrian garrison in the Podgorze district in order to drive the Austrians from Krakow and to allow the Poles to take over.

This bold act was the result of a detailed plan by Stawarz and other Polish soldiers and civil officers in Krakow, and it turned out to be a success. Austrians gave up without a shot, and Krakow became free. Other Polish cities had to wait until the end of the war on Nov. 11, which is an official national holiday.

This year on October 31st, Krakow celebrated the 89th anniversary of this event.

At noon the mayor, Jacek Majchrowski, laid flowers at a commemorative plaque in the Town Hall tower and presided over an honor guard ceremony performed by the 13th Galician Infantry Regiment, the Krakowskie Dzieci (“Children of Krakow”).

In Planty Park, a concert by a brass orchestra took place, and flowers were put on Stawarz’s grave in Rakowicki cemetery. It also was announced that a new Krakow street would be named for Ludwik Iwaszko, one of the officers who bravely led the soldiers from Podgorze district to Market Square against the Austrians.
The climax of the celebrations was a traditional relay race by the seven oldest high schools in Krakow (Nos. 1 to 7). The teenagers’ competition was spirited, and the winner was high school No. 5. It received the sabre of Lt. Stawarz, as well as other prizes.

There was, however, a bit of controversy on the anniversary. One of the celebration’s events was the administering of an oath to newly admitted members of the municipal guard. The stand at Market Square was used for the presentation of the municipal guard and its equipment and for recruiting brochures. To the astonishment of many, the stand also was occupied by the Anwa company, a Toyota dealer in Krakow, which was promoting its vehicles and encouraging test drives.

“This is appalling,” said one of the older people attending the celebration. “They’re mixing a national celebration with merchandise!”

That opinion was shared by Jerzy Bukowski, chairman of Krakow’s Veterans Organizations Association.

Another controversial action by Wiaterek was his use of a municipal guard radio car for a trip to a Toyota event.
A municipal guard spokeswoman, Marta Ciesla, said the relationship between Toyota and the municipal guard is proper, legal and free of any compensations by any of the parties. However, the mayor’s spokesman, Marcin Helbin, said Janusz Wiaterek will have to explain the entire situation to the mayor, as the municipality had not been notified of the Toyota dealer’s role in the celebration.