Speaking to an acquaintance from John Bull’s island the other night, he says: “You know what’s wrong with the Irish, you never had an empire.” I had to put him straight on a few minor points, most importantly that we never needed to play the British at their own game, merely get them to play ours.

With this in mind, some enterprising chap round about Ring’s End, Dublin came up with a simple yet stunningly effective idea: If we wanted to banjacks the Brits, we had to get them to pay for it. After all, what is Ireland’s greatest cultural export? Yes, got it in one – beautifully rich, dark and creamy with an appropriate reverence for the art of patience. With such a recognisable brand in your glass, we had to create an appropriate environment. Thus, the concept of the Irish Theme Pub was born.

With names like Scruffy Murphy’s, these hostelries were named to appeal to the long held prejudices of the target audience. Realising the standard was too high to fulfil the mission, the secret Lets Get Revenge on the Brits and Have a Good Laugh at the Eejits at the Same Time committee came to the conclusion that the quality of the products and services on offer were too refined and civilised for the objective. 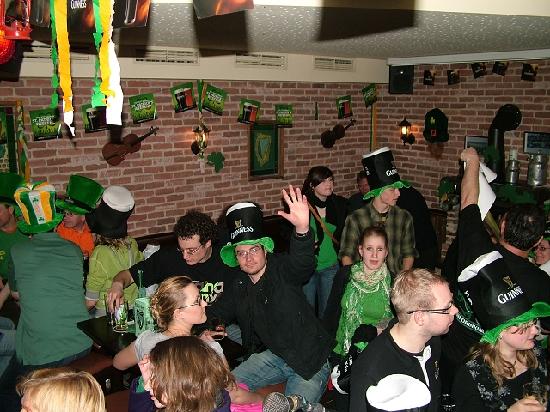 As everyone knows, Irish jokes are ridiculously simple so the Brits can understand them. It was quickly realised that a certain amount of dumbing down was necessary. Now we have these hostelries serving extra chilled (!) stout and appropriately stodgy fare, reminiscent of the times before the colonials followed the Brits home from all over the world to teach them how to cook.

The Brits loved it, but boy, do they behave badly. Anyone out in Krakow of a weekend can spot these ‘gentlemen’ a mile off. Swagger is quickly replaced by stagger, fall and gutter. For those with better balance, there is the a mandatory self-fondling of private parts with tongues hanging out, leering at any beautiful women who happen to cross their path – this being Krakow, that’s all of them.

What wasn’t expected was that the Irish Theme Pub would be adopted by travellers from all over the world, looking for something safe and familiar in foreign parts. You know the type. They do their tours and see the sights but are neither streetwise nor savvy, equating frequenting local ‘lokaly’ to entering war zones. The familiar is comforting and the chance to watch the Brits embarrassing themselves gives a feeling of superiority.

While the project, funded by the National Development Plan, was considered a success, there were a couple of unintended consequences, one of general interest, the other of interest to the dear readers of this organ.

I recall a close friend on the committee hazarding that Krakow would never be big enough to handle the mass drunkenness necessary for the national embarrassment of Ireland’s nearest neighbours. It was decided that the majority of this effort would be centred on Prague, considered large enough to facilitate a project of this size, with satellites in other former Eastern Bloc cities. In Poland, it was to be restricted to Warsaw, which was pleasing to natives and non-natives alike in our beloved city.

How the affliction spread to Krakow is unknown. Some clever Brits (yes, there are some out there) have been organising rampaging weekends (aka stags) and making good coin out of the naivety of their compatriots. Good luck to them.

Another unintended consequence, not factored into the original equation, was that from our own isle came many similar eejits who foolishly followed the Brits down the Path of National Shame Abroad. The Poles are complaining bitterly, but when aren’t they? We apologise most sincerely for the inconvenience.

One thought on “Bull On the Page: The Irish Pub”