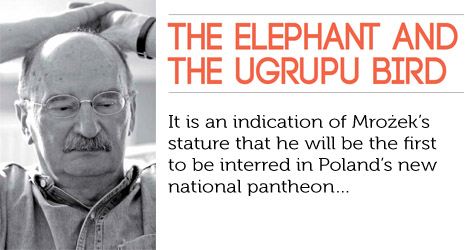 In August, the literary world lost one of the greats. Sławomir Mrożek, one of the most significant and prolific Polish writers of the 20th century, and a native Cracovian, died in Nice, France, at the age of 83.

It is an indication of Mrożek’s stature that he will be the first to be interred in Poland’s new national pantheon, in the crypt of Krakow’s St. Peter and Paul’s Church. The Polish Minister of Culture called Mrożek’s output: “A treasure trove of literary conventions and motifs but also a highly original analysis of modern times.”

Mrożek’s fame is largely a result of the success of his plays, but he was an astoundingly prolific artist with a versatile creativity. In addition to a nearly uncountable number of plays, he also wrote screenplays, drew satirical illustrations, was a brilliant journalist and created grotesque-philosophical prose that literary critic Tadeusz Nyczek has deemed: “One of the most unique pinnacles of post-war literature.”

Mrożek grew up in Krakow. He enrolled at the university, but was an unhappy student and never completed his studies. In his early twenties, during the Stalinist era, he wrote articles for Dziennik Polski that conformed to the ideological journalism of those times. Mrożek’s early zealousness for the Communist regime, and his radical abandonment of it a few years later, followed a trajectory common among many 20th-century Central European writers – youthful infatuation, and subsequent disillusionment with Socialism. He never denied his past. In his autobiography, published in 2006, he wrote: “Being twenty years old, I was ready to accept any ideological proposition without checking it too carefully – the only thing that mattered was that it was revolutionary.”

From 1956 to 1960, Mrożek wrote a popular column, accompanied by his own illustrations, in which he mocked the absurdities of daily life in Communist Poland, simultaneously satirizing common journalistic forms of the time such as the ‘informative telegram.’ One of his satirical examples ran as follows: “From the scientific activities of the UNO: The spokesperson for research into the effects of work in agriculture and forestry has declared that the employment of professors to cut down forests does not have any influence on the quality of the timber.” At first, Mrożek employed absurdity and satire in his columns to amuse readers, but over time this developed into a sophisticated tool for analysing social and existential issues. He became a mirror for the grim reality of socialism in Poland, reflecting its ridiculous language, its illogical functioning, and the absurdity of living in a squalid, nightmarish landscape that official government propaganda depicted as a strong and prosperous country.

Mrożek’s first collections of short stories, Tales from Bumblebee Mountain and Practical Half-Armour, appeared in 1953. His style developed further in the collections that followed: The Elephant (1957) and The Ugrupu Bird (1959). He made his debut as a playwright in 1958 with The Police, but the breakthrough in his career came in 1964 with his play Tango – the first of his works to gain international acclaim.

Mrożek has often been connected to the Theatre of the Absurd, alongside Beckett and Ionesco. For Western authors, the absurd worlds in their works represent a metaphoric reality, but Mrożek’s works had roots in the unique social situation of Communist Poland. His use of the absurd was a powerful tool enabling him to comment on the bleakness of Polish reality while evading the Communist censors. It is this that sets him apart.

Mrożek spent a large part of his life in exile, after falling foul of the Communist authorities in Poland. He lived abroad from 1963 until 1996, before relocating to Krakow. Declining health prompted him to return to the south of France in 2008, where he spent the last years of his life. His funeral will take place in Krakow on September 17th.