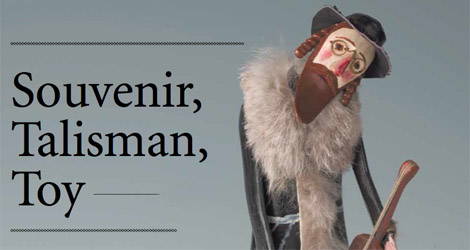 The statuettes of Jewish figures that crowd Krakow’s souvenir stands often horrify foreign visitors. Usually big-nosed and dressed in Hasidic black, and often clutching coins, they seem to represent the crudest of anti-Semitic stereotypes being sold as objects of fun. Many Poles are taken aback by these reactions, seeing them as harmless traditional talismans. A recent exhibition at Krakow’s Ethnographic Museum sought to open a dialogue between these points of view, with interesting results.

The exhibition, titled ‘Souvenir, Talisman, Toy,’ proved so popular that it was extended through August at the Galicia Jewish Museum in a ‘Phase II’ that offered a further chance for visitors to interact with the project and to continue a cultural dialogue which began in early June alongside the successful 2013 Jewish Cultural Festival. 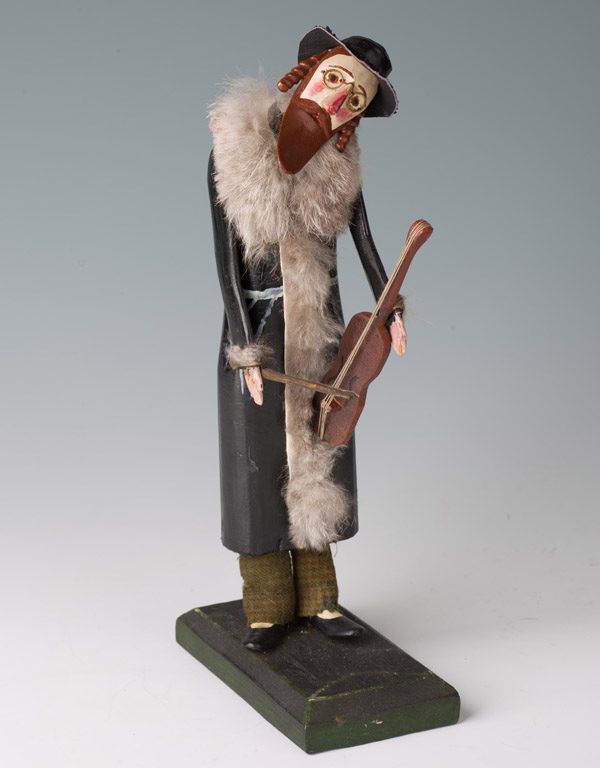 Jewish figurine from the collection of the Seweryn Udziela Ethnographic Museum in Krakow, photo Marcin Wąsik/MEK

Conceived and curated by Erica Lehrer, an anthropologist based at Concordia University in Montreal, Canada, the exhibition sought to understand the history and symbolism of wooden carvings of Jewish figures in Polish culture. The project continues via a website that encourages visitors to submit pictures of Jewish figurines as part of an interactive archive to aid Lehrer and others with their research.

Jewish figurines have a long presence in Polish culture. One purpose of ‘Souvenir, Talisman, Toy,’ was to act as an intercultural bridge between two perspectives wrapped in the complex history of Polish-Jewish relations. The question is: did the exhibition achieve this feat?

While Jewish opinion has predominantly been that the figurines are overtly anti-Semitic, highlighting Poland’s ambivalence towards its Jewish heritage, historically many of these carvings have depicted Jews and Judaism positively. Once treated as talismans among the Polish peasantry, such figures were commonly used in Christmas nativity scenes, and are still traded today at Krakow’s Emaus Easter fair, as they were in the 19th century.

Today, the Jewish figurines are popular with many Polish tourists but continue to trigger knotty emotions in other groups, particularly the large numbers of Israeli visitors who come to Krakow. Jonathan Ornstein, Director of the Jewish Community Centre in Krakow, praised the exhibition for tackling difficult to discuss issues. When asked whether the figurines are good or bad for Polish Jewry today, he added:

“People who come to Poland with certain preconceptions about Polish attitudes toward Jews take one look at the figurines and have their worst fears confirmed. To me, that’s a shame. Poland has made such remarkable strides in dealing with lingering issues of anti-Semitism, I hate that these figurines can easily blind tourists to the progress Polish society has achieved in this area. For many Poles, Jewish life and the image of Jews is frozen in 1939, the last time there was a sizable, visible Jewish presence. The figurines are focusing on an imagined Jewish identity that was never representative of all Jews in Poland.” 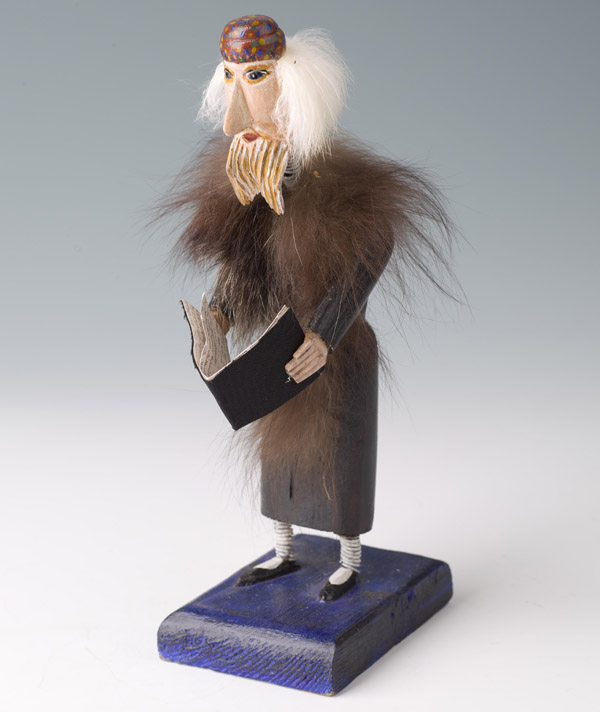 Jewish figurine from the collection of the Seweryn Udziela Ethnographic Museum in Krakow, photo Marcin Wąsik/MEK

In an interview, Polish carver Józef Reguła, whose work is featured in the exhibition, stated that many American tourists with Jewish and Polish roots buy the figurines as a keepsake of their family history, while Germans have bought them as monuments to a culture lost during the Holocaust.

Reguła, like other sculptors, is a talented artisan. Drawing inspiration from personal Jewish accounts and the work of Polish-born Yiddish writer Isaac Beshevis Singer, his main goal is to translate the diversity of Jewish culture in sculpture. Applying much care to his carvings, he seeks to understand how Jews became a part of culture in Poland, showing the richness and expressiveness of Jewish tradition. “On my shelves,” said Reguła, “Jews and peasants live side by side, and they live in peace.”

When asked whether the exhibition had achieved its aim of opening a dialogue around the figurines, curator Erica Lehrer said:

“From both the press attention, and also my direct observations of people in the galleries and the audiences at the two associated panel discussions I ran, it seems that the goal of creating dialogue worked… the single response that made me feel the exhibit was a success was sent to me by an Israeli woman whose passionate 2010 letter of complaint to the Polish Minister of Tourism I had put on display in one of the galleries. She wrote to me on the opening day: ‘I think it is such a good thing what you are doing in exhibiting these various figurines in a… context which is educational and encourages debate. I watched all the video interviews, which put the horrible figurines I encountered some years ago in a broader perspective, and at times even [a] positive [one]. I still feel that there is also an element of anti-Semitic stereotyping that I find very offensive… I hope that this issue is one of the issues that is being debated and brought to consciousness.’ This more nuanced understanding is exactly what I was going for.”

Lehrer is currently working on an exhibition catalogue, that should be available from 2014, and other versions of the exhibition may appear in cities across Poland. The Krakow exhibit received over 1,500 visitors, so Lehrer hopes this success can be replicated both elsewhere in Poland and abroad. While a divergence of opinion over these figures will continue to exist, Lehrer and the rest of her team can be pleased with the result – based on the many visitors’ comments in the gallery notebooks, the exhibit seemed to make people think in a new way.