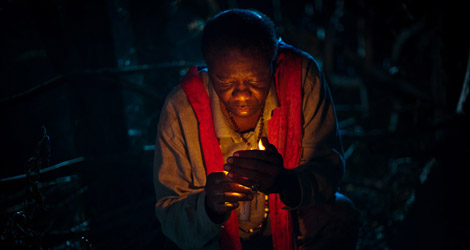 Can a documentary really be a documentary if its central character never appears on screen? Sztuka znikania (2013) provides a resounding ‘yes.’ Co-directors Bartek Konopka and Piotr Rosołowski have created a clever twist in the latest of their ‘Guide to Poland’ films.

The central figure is Amon Frémon, a Haitian voodoo priest who finds himself in Warsaw on the eve of Jaruzelski’s coup d’état. The history of the Polish Legionnaires who turned their back on Napoleon to join the Haitian Revolution is little known today. It was to their descendants in the village of Cazales that Frémon was born.

Konopka and Rosołowski carefully investigate his alienating journey in a cold and inhospitable country where the Palace of Culture and Science looks to the voodoo ambassador like a gigantic tombstone with windows. This fictionalised account of Frémon’s sojourn in a strange land, as brilliantly devised by the writer Ignacy Karpowicz, has much to say about the spiritual affinities between Haiti and Poland, as well as the fearful similarities between their oppressive regimes at the time. The voodoo rites, performed by Frémon to free the country of his ancestors from evil, are portrayed without didacticism by the filmmakers.

As a semi-fictional tale, Sztuka znikania masterfully shows how spirituality can contribute to the fight against tyranny and heal people under oppressions all over the globe. The news that Sztuka znikania will be marketed to foreign distributors by New Europe Film Sales is very welcome.