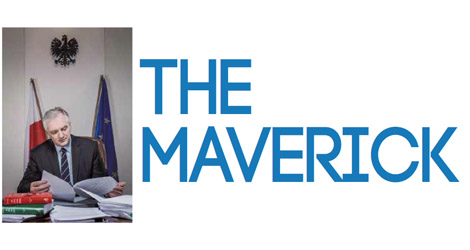 Krakow politician Jarosław Gowin was elected as one of 14 members of parliament for the Krakow constituency in 2007, and again four years later. He was appointed Minister of Justice by Prime Minister Donald Tusk in 2011 and looked to be on the path to a powerful political career. Just two years later, he is now seen as a troublemaker by many in his party after being sacked from his cabinet post and mounting a failed but highly divisive leadership challenge against Tusk.

How did it come to this for the man who entered politics in triumph at the age of 44 after a glittering career in journalism and education?

Gowin was born in 1961, in Krakow. He spent his early years in Jasło, in neighbouring Podkarpackie. Gowin’s parents were activists in the anti-Communist Freedom and Independence movement, and the conversations he heard at home sparked an early interest in politics and shaped his political views.

He also credits his youthful sporting career as helping to form his character: “I was a goalkeeper for the Black Jasło (Czarni Jasło) football team. I had to work hard to overcome the fear of being hit by a powerful shot on goal. That was good practice for my willpower,” he said.

After graduating from high school, Gowin moved back to Krakow to study history and philosophy at the Jagiellonian University. This was the early 1980s, and Gowin recalls endless conversations with his colleagues about how Poland would look once the Communist regime fell.

He received a scholarship to attend Cambridge University and moved to the UK. There he met the acclaimed Polish political scholar, Zbigniew Pełczyński, who is also known as the tutor of former US president Bill Clinton, Hungarian Prime Minister Viktor Orbán and Polish Minister of Foreign Affairs Radek Sikorski. Gowin describes him as a: “Remarkable man, the author of many books, who found time to see where I lived, what I was reading and talk to me about Poland.”

Upon returning to Poland, Gowin started work as an assistant at the Institute of Social Sciences at the School of Education in Krakow and for the conservative Catholic monthly Znak. In 1994, he was appointed editor-in-chief of the magazine, a position he held for over a decade. During this time, Gowin met the eminent priest and philosopher, Józef Tischner, and became deeply influenced by his political views.

The future politician’s friendship with Tischner also prompted his interest in the history of the Polish Catholic Church since 1989, which formed the basis for his Ph.D thesis at the Institute of Political Studies and a book he published in 1995. “It is a pleasure for me to hear graduates say that, for them, it was the best book showing Polish society from the beginning of the transformation,” he said.

Into the Political Arena

Gowin broke into politics in 2005 when he was elected as one of four members of the Senate for the Krakow constituency. He stood as a candidate for Civic Platform, which was then a rapidly rising force in Polish politics, but was still defeated by Prawo i Sprawiedliwość (Law and Justice party) in the parliamentary elections of that year. Two years later, he moved to the Sejm in the elections that brought Civic Platform to power.

In November 2011, following a second Civic Platform win, Prime Minister Donald Tusk named Gowin Minister of Justice. It was a controversial appointment among some members of Tusk’s party, who disapproved of Gowin’s conservative views.

Despite some notable successes in boosting employment by removing bureaucratic hurdles from 49 professions, Gowin soon got into hot water for bucking party discipline. When Tusk ordered opposition to a law proposed by the United Poland party aimed at stricter controls on abortion in Poland, Gowin abstained. His next clash with Tusk came only a few days later when Gowin publicly expressed his disappointment that the PM had not consulted him before announcing an increase in funding for in vitro fertilisation treatment for some married and unmarried couples.

The tension between the two reached a new peak in February of this year, when Gowin led 46 Civic Platform members in opposition to Tusk’s attempt to legalise civil partnerships for heterosexual and homosexual couples. Only a month later, Gowin was one of very few cabinet members who publicly supported Lech Wałęsa’s statement that gay politicians should: “Sit behind walls.”

Things came to a head in April. During a television interview, Gowin shocked viewers by claiming that German scientists were importing embryos from other countries, probably also from Poland, in order to conduct experiments on them. The statement sparked a diplomatic dispute between the two countries and Tusk decided to dismiss Gowin, saying: “I don’t have time to explain ministers’ comments every week.”

A few weeks later, Gowin announced his decision to challenge for the leadership of Civic Platform, despite polls indicating he had little chance. In the vote by party members on August 22, Tusk received 80 percent.

Philosophical in defeat, the challenger said: “I want to say very clearly – we have competed but now the competition is over. I will keep my fingers crossed for Mr Tusk.” Soon after, Gowin announced he was ‘suspending’ himself from Civic Platform, an unprecedented move, in protest at the suspension of Jacek Żalek.On September 9, he resigned from the party, saying: “Remaining in PO would be contrary to my conscience.”

With the recent resignation of another prominent conservative-leaning member of the party, John Godson, and the steady rise of main opposition party, Law and Justice, in national polls, it looks like there are interesting times ahead, and Gowin does not seem the kind of man to keep his head down for long.