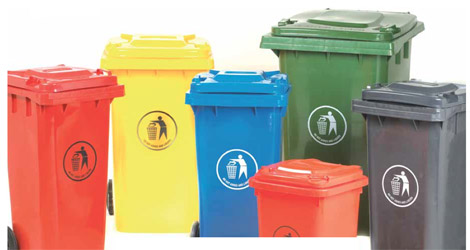 One month after new laws about the collection of rubbish in Krakow came into force, many Cracovians are complaining that the transition has been bungled by the city. There have been numerous reports of uncollected rubbish creating a health hazard, and many buildings have received posters telling residents how to segregate their rubbish, but no bins in which to put the segregated refuse.

“There is a nice, clear notice in the refuse room explaining what kind of rubbish to put in blue bins, yellow bins and green bins, but there are no yellow or green bins. People are, understandably, confused,“ said Kuba, a resident of an apartment building in the city’s Krowodrza district.

According to the website of the Polish Ministry of the Environment, it is generally down to the owner of the property to provide refuse collection facilities, but it also notes that local gmina (the smallest administrative units) may provide bins to residents, depending on the agreements they reach with refuse collection companies.

What this actually means is that building owners, or the residents’ committees that administer buildings, were required to make a waste declaration before the July 1 deadline. These declarations included whether or not the building would be segregating its waste (80 percent in Krakow said they would) and, crucially, the number of green and yellow bins they would need.

The bins themselves were to be provided by the Municipal Waste Disposal service (Miejskie Przedsiębiorstwo Oczyszczania) for a rental fee. MPO also has overall responsibility for refuse collection services in Krakow, and works with several private companies to achieve this.

Even in places where green and yellow bins have arrived, they are proving too few for the volume of segregated rubbish. On July 2, Gazeta Wyborcza reported that a single yellow bin had been delivered to Osiedle Niepodległości (an estate of 18 blocks in Bieńczyce), which had filled and overflowed within hours.

MPO spokesperson, Krystyna Paluchowska, said: “We will need some time to implement the new rules,” she said, adding that it would take “several days” to get bins to everybody. She also laid some of the blame on residents, saying that many buildings had made their waste declarations incorrectly, or underestimated the number of yellow and green bins they would need, in order to reduce their costs. She pointed out that MPO had already received thousands of requests to correct waste declarations.

MPO is recommending that residents who live in buildings that do not yet have green and yellow bins should still segregate their rubbish and leave it in separate bags beside their mixed-rubbish blue bins. Unfortunately, in places where this advice has been followed, bags are frequently spilling their contents across courtyards.

Paluchowska praised residents who have made the effort to segregate their rubbish, saying: “There is a growing sense of responsibility among Cracovians who are serious about their civic duty.” The risk, however, must be that conscientious citizens will quickly lose their enthusiasm for the scheme if they continue to see their efforts undermined by poor organisation on the part of the authorities.

3 thoughts on “Chaotic Transition to Rubbish Segregation in Krakow”