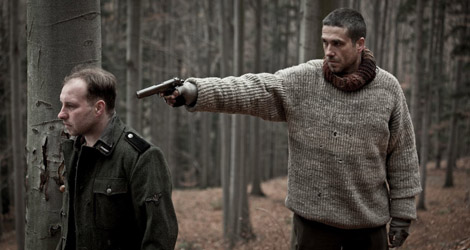 When asked to justify the release of yet another movie on the subject of World War II, the director of Obława (Manhunt, 2012), Marcin Krzyształowicz, said: “There should be dozens of movies about World War II, provided that they explore new aspects of it.”

Obława was somehow overshadowed by the international recognition of features such as In Darkness and Rose, both of which were released in 2011, but Krzyształowicz’s effort is anything but a third wheel to Smarzowski and Holland’s hits. Obława is certainly the most audacious of the three films in terms of narrative and editing style. Krzyształowicz opted for a non-linear structure to recount the story of his protagonist, a Polish partisan nicknamed Wydra, ‘The Otter,’ (Marcin Dorociński) who mercilessly hunts down Nazi collaborators and performs, often gory, executions with cold professionalism.

Maciej Stuhr plays Henryk, a former friend turned traitor who The Otter must kill, forcing him to examine his actions and motivations. Stuhr exudes the cowardice and insecurity of a turncoat, while Dorociński is simply impeccable in his role. Set among forest clearings magisterially captured by Arkadiusz Tomiak, Obława feels something like an extended cut-scene from a yet-to-be- released stealth game.