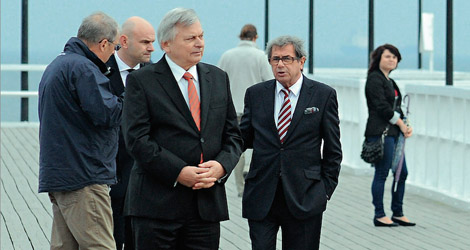 Ryszard Bugajski was one of the few Polish directors who did not manage to re-establish his career abroad after being artistically emasculated by the Communist regime. Following the release of Przesłuchanie (Interrogation, 1982), a brave, Cannes-award-winning drama that was smothered by a domestic fatwa, Bugajski moved to Canada where he had to content himself with television features.

Years later, Bugajski returned to the big screen with his biopic, General Nił (2009), about a commander of the Polish Home Army executed by Communists. Układ zamknięty is set amid the power plays that overwhelmed Leszek Miller’s government at the beginning of the 2000s. Janusz Gajos plays the role of Andrzej Kostrzewa, a Machiavellian prosecutor who fabricates charges against the founders of a start-up company. Bugajski remains in step with current thinking by showing that the forging of evidence by the secret services is no longer sufficient to destroy reputations.

At times, Układ zamknięty seems a mere paean to free enterprise, populated by almost black-and-white characters. Certainly, Bugajski’s lacks the rigor of Costa-Gavras’ or Francesco Rosi’s political thrillers, but he is to be congratulated for reviving questions about the Polmozbyt Krakow Affair, one of the few political scandals of the time that remains unresolved.