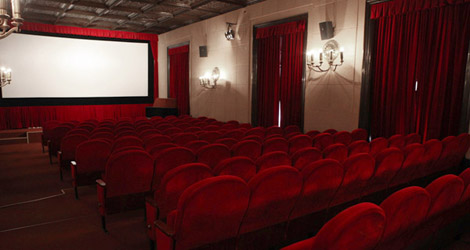 As the Krakow Film Festival gets into full swing, the Krakow Post beings you a roundup of the city’s many independent cinemas. 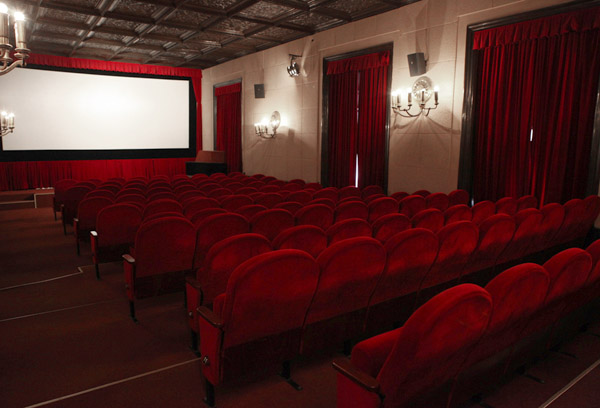 Kino Pod Baranami (Cinema Under the Rams) enjoys the finest location of any movie house in Krakow – inside an historic palace on the corner of the Main Market Square. The Pod Baranami Palace, from which the cinema takes its name, has an intimate association with the cultural life of Krakow. The infamous Piwnica pod Baranami cabaret club opened in the cellar of the same building in 1956 and remains in business today. Kino Pod Baranami opened in 1969 and is firmly established as one of the city’s favourite art house cinemas. It has three screening rooms: the Red Room can seat 128, the Blue Room 102 and the newest addition, the White room, has seats for 30. As well as show- ing mainstream and new Polish movies (often with English subtitles), Pod Baranami holds regular thematic movie weeks (silent cinema, Russian cinema, African cinema etc.) and all-night movie marathons. The cinema does a lot to cater to moviegoers with kids, holding screenings for parents and tots and often complementing its film festivals with screenings and events on the same themes for the youngsters. 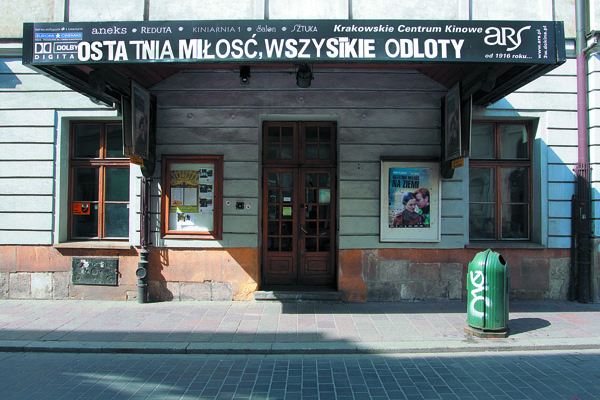 Kino ARS has had a troubled history, despite being one of the best-loved art house cinemas in Krakow. The first cinema on this site opened in 1916 and survived until 1980. In 1995, movie magic returned to this Old Town street in the form of Krakowskie Centrum Kinowe ARS (or Kino ARS, as it if better known). The ARS acronym is taken from Aneks (annex), Reduta (redoubt), Sztuka (art), the names of the original three screening rooms. Disaster loomed in 2012 when the building’s owners massively increased the rent, but a city-wide outcry backed by a furious social media campaign secured a five-year deal that allowed the cinema to remain open, though it lost its largest screening room. Kino ARS now has five, small screening rooms, each with its own distinct atmosphere, and one featuring a bar. The cinema’s repertoire includes mainstream English-language movies and lots of Polish films. Discussion groups and guest lectures are also held here. 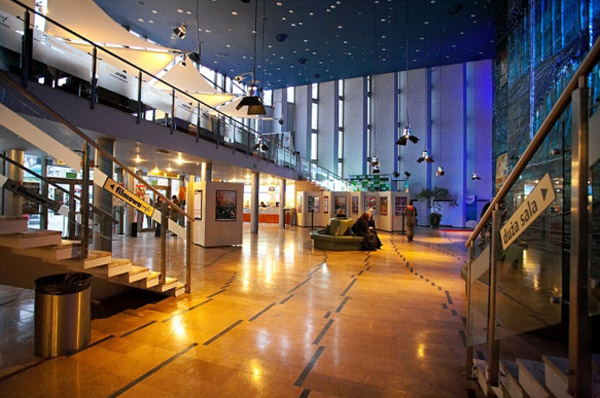 Kijów.Centrum, previously known as Kino Kijów (Kiev Cinema), was a revolution in movie-going when it opened in 1967. It was the largest cinema in Krakow at the time and the first in Poland capable of screening 70mm widescreen format movies with stereo sound. The building is now a treasured example of Communist era architecture, as is the monolithic Hotel Cracovia next door, and features striking mosaics on the exterior back wall. The cinema changed its name in 2008 after a major renovation programme that added a café, a second screening room and technological improvements. As well as showing the latest mainstream movies, live broadcasts of opera, ballet and concerts from London, New York and Moscow, and acting as a venue for film festivals, Kijów.Centrum runs the Klub OFF Kijów in its basement. This cosy film club with a bar shows B-movies (often free of charge) and hosts film discussions, concerts and exhibitions. Kijów.Centrum’s main screening room seats 828, and the smaller room 32. 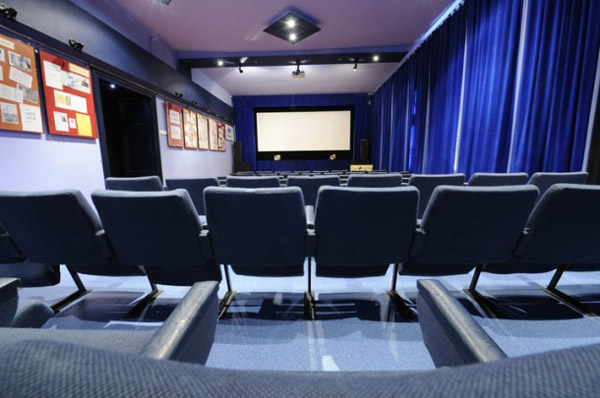 Kino Paradox first opened its doors in 1956 at a location on ul. Krowoderska and originally functioned as a meeting place for the Polish Boy Scouts, though it also hosted movie evenings from the beginnings. It underwent renovation in 1978 and has functioned as an independent cinema since then. In 1996, Kino Paradox moved to its current location on ul. Krupnicza. It boasts a student friendly environment and hosts forums such as the Student Film Discussion Club for both high school and university students. Discounts can be obtained by joining the club. Paradox has been part of the Student Cinema Network since 1997 and strongly emphasizes Polish and European cinema, both contemporary and classic. Paradox can seat up to 60 people and has one screening room. 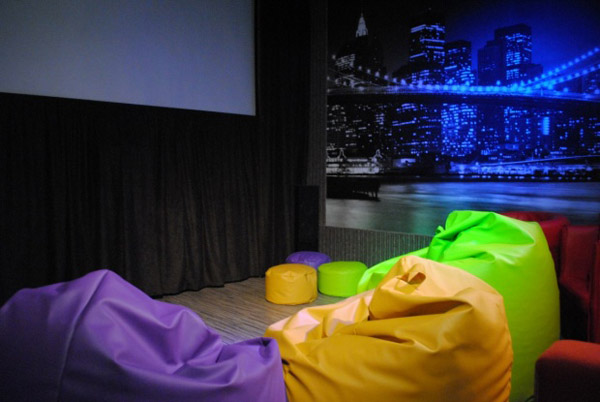 KIKA is one of the newest additions to the family of Krakow’s independent cinemas, and the first in the Podgórze district on the south side of the Vistula. The venue is both a café and a movie theatre, so you can enjoy a fresh coffee and a pastry before heading in to your screening. KIKA also holds frequent cultural meetings, lectures, and movie premiers. It specialises in showing movies that have long disappeared from the multiplexes and goes to great lengths to be child-friendly, holding regular screenings for parents and their youngsters. The cinema seats up to 41 guests and KIKA is available to rent as a unique event or party venue. 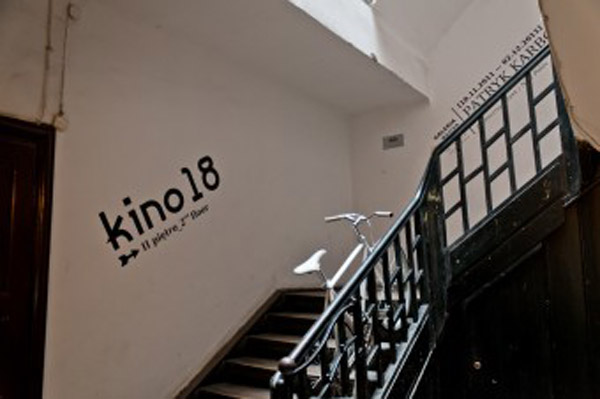 Kino 18, also known as Kino Pauza, is located on the second floor of the building at ul. Floriańska 18, next to the hyper-trendy Pauza Café. The cinema, in association with the café, frequently hosts special guests, lectures, interviews, and openings. Kino 18’s ‘mission statement’ is to cater to moviegoers looking for a rich movie experience that cannot be found in popular cinema. Their selection is centred on independent films ranging from animation to documentaries. Kino 18 takes special care to cater for non-Polish audiences with many of their screenings featuring English subtitles. There is one screening room and films are shown seven times a week.

The oddly named Agrafka cinema (‘agrafka’ is Polish for ‘safety pin’) is a relatively new independent movie house in a location with a long cinematic history. Kino Paradox was housed in this building on ul. Krowoderska from 1956. When the associated youth club moved in 2009, a renovation project resulted in the birth of Agrafka. The cinema is known for its close involvement with Krakow’s dynamic student life, hosting discussions, meetings and lectures. In 2011, Agrafka received the Polish Film Institute award for Best Movie Theatre in Poland. Agrafka is proudly popcorn free. The screening room seats 109. 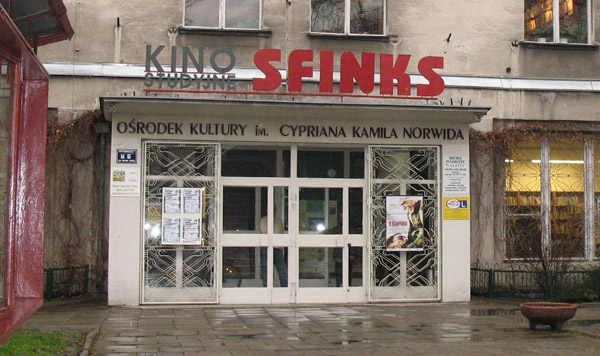 Kino Sfinks has been bringing big screen delights to the people of Krakow’s often neglected industrial district, Nowa Huta, since 1960. Since 1985, it has been part of the CK Norwid Culture Centre, which also includes a library and masses of other community facilities. Sfinks screens international and Polish films with an emphasis on shows for kids and senior citizens. The centre also boasts a film studio, which produces a weekly seven-minute news feature about life in the district – a unique undertaking in Poland. 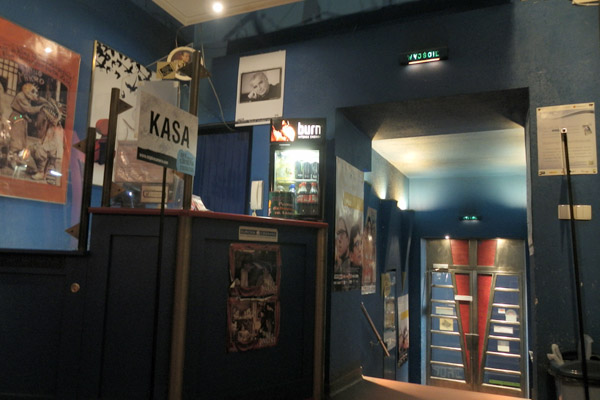 Kino Mikro has been promoting art house movies in Krakow since 1984. As the name suggests, Mikro is not Krakow’s largest movie house, but it is one of the most innovative and influential. In its early days, Mikro hosted the legendary Mikro Show, a combination of live performance and film. One famed example featured actors dressed as vampires climbing through the windows and ‘attacking’ the audience during a showing of horror animations by eccentric Krakow director Alexander Sroczyński. Kino Mikro’s main showing room can seat 121 and is known for its distinctive red and blue décor. The smaller Mikroffala showing room has comfortable couches and a piano and can seat thirteen viewers. Kino Mikro remains strongly involved in the independent movie scene and regularly features as a venue for Krakow’s many movie festivals.

One thought on “Krakow’s Independent Cinemas”